Yet another blog post about Everway, the doomed fantasy RPG system that tried to ride the Magic: the Gathering gravy train and failed miserably.

Here’s what happened: in the mid-90s, Wizards of the Coast had made a lot of cash on MtG and decided to make a roleplaying game.  The roleplaying game would come in a nice big box (in an era when RPGs were moving to softback large format books) and contain pretty art cards that were a visual part of the game experience; but more importantly they were a gateway drug to usher roleplayers into the CCG market.

This was the problem.  They sold a basic set with 90 “vision cards” as well as a “fortune deck” (like an expanded and tweaked Major Arcana for Dummies).  More Vision Cards could be purchased and collected.  But the extra cards didn’t come in nice 90 card sets – they came in random 8-card booster packs a la MtG.

Now, MtG players are abundant, and each one will buy loads of cards for themselves and end up with surplus to trade, so randomised boosters are no problem.  But for a RPG, the first person to buy the set and the cards will be the GM, and the chances of their players all buying sets themselves are slim.  The chances their players would buy vision cards for themselves are slimmer.  The chances that enough Everway GMs would get together in one place to trade their surplus cards must be miniscule.

Since I looked into Everway I’ve also looked at the general fantasy art card market.  FPG produced sets of fantasy art in the mid 90s by the likes of Jeffrey Jones, Christos Archellios and Ian Miller in booster packs just like MtG cards.  But the market for art card collectors must be slightly different from the market for GMs who are using them as RPG props, and that market is different again for MtG players.  The market is not the same – only a handful of Everway GMs would have the completist mentality to get all of those cards – the rest would probably spend their cash on White Wolf games (hey, it was the 90’s).

I understand that distributors were forced to take Everway if they wanted to sell MtG.  That alone indicates that Everway wasn’t considered a strong enough product to stand on its own merits, so in WotC’s eyes its card was marked.

That’s why today you can get complete boxes on eBay for less than a single modern RPG book would cost.  Even if you pay 25 quid (the high end of the price range) it’s a bargain.

The box contained three little books (not too fat and a nice size to read), one for players, one for GMs and a special book about the fortune deck.  It also contained 90 Vision Cards, a Fortune Deck, and a few other cards.  And it had a whole load of full colour, double sided pre-generated characters.

You can read the summary of the system on the Wikipedia page.  But basically this is the system summary: characters are defined by their scores in four elements, which are then used to compare their ability with the task at hand in one of three ways – karma, drama or llama fortune.  The first just uses the ability score and asks “is the character up to it?”; the second provides a result based on the outcome that fits the dramatic situation; and the third is randomised.  That’s nothing earth-shattering but it’s nice to see it expressed so succinctly.

I believe that four is the sweet spot for simple (and indeed complex) RPG systems.  Now, Everway isn’t the first system to use a four attribute model, but it manages to be one of the more intuitive approaches.  And really all a player needs is to know whether their character is equal to the task at hand or not.  Yes, Everway paints characters with a broad brush (four attributes, four speciality skills, maybe a power or two) but that’s enough; it’s good to have implied power, because it enables player creativity and it allows for them to add extra dimensions to their character that haven’t been considered at generation.  And character stats can be written on an index card. 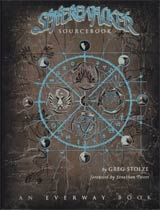 Greg Stolze writes a bit about Everway here, mostly about his contribution Spherewalker, which is itself a fantastic piece of work and completely systemless.  He says he wishes the public had loved that work as much as he did, and I agree.

He’s also interviewed here, using that “Everway is right-brained” phrase he’s so fond of.  Which will irritate certain friends of mine with psychology degrees, which is a bonus.

Finally, in the spirit of Everway I give you the Black Rose by Jeff Jones: 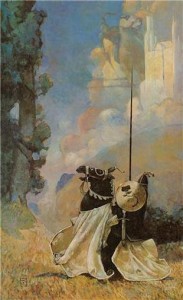 This to me is what Everway is all about – images and art, not dice.  As far as I know this picture doesn’t appear in the Everway card sets, so I’m going to look for some Jeff Jones FPG sets.  Can’t imagine why we don’t use art cards more – we bought enough MtG boosters.