Art That Hates You

Warning: I am going to talk about a film and it will contain spoilers.  This would be something that would frustrate me if i didn’t feel the film was spoiled already.

But just in case you don’t read the rest of the text, I’m going to print a bit I was saving for the end.  T and I went to Venice again recently, on a day trip from our holiday near Lake Garda.  We went to the Guggenheim again, and I got a t-shirt with the Angel of the City in silhouette on the front: 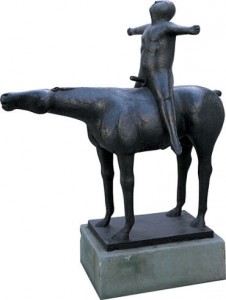 It’s a bronze statue of a naked man on a horse with a huge erection.  It’s apparently one of a series that Marino Marini did of mount and rider, where the later sculptures show the rider’s attention directed somewhere other than his mount.  Not sure why the horse is straining its neck like that, unless the chap was prodding it in the back of the neck with his nob.  That would make me kind of apprehensive too.  But what you can’t see is the look beatific joy on the man’s face, which really evokes the joy of the piece (at least from the man’s perspective).

Now, on to Funny Games. 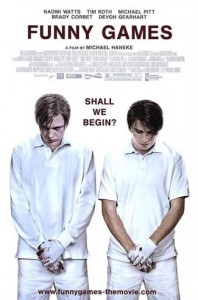 I dimly remember seeing the trailer and immediately T said “I don’t want to see that”.  I did because it looked stark and stylish, and just a bit surreal.

Now, these people don’t have much good to say about it.

I sat through it over the weekend after the holiday.  T doesn’t like this kind of film so I started at around 7.30am (couldn’t sleep, which seems to be a trend these days).  I finished at around 5pm after numerous breaks.  The film itself is about 2 hours long but I found it difficult to watch and engage with the film for more than 20 minutes at a time.  God knows what the people in the cinema felt – Kermode described it as “being lectured to”.

Many directors break the fourth wall.  Sometimes it’s to share a joke or do a double take with the audience.  In Funny Games it’s used to lecture the audience that we are, basically bad people for enjoying depictions of violence, to ask us why we’re still here, to tell us that there is no hope.

Up to a point I don’t really mind the lecturing.  I get that the director hates his audience, hates the cartoon violence of american cinema, and feels that the audience need to be woken up and examine why we choose this as entertainment.  It is a very nicely crafted piece of cinema, the message is entirely valid and the way it has been delivered has profoundly affected me in a way few horror films ever have, in that I remember and replay bits of the film in my head.  Part of the reason for this post is to try to lay those thoughts to rest.

Funny Games will not change my view on action movies or violence in cinema.  If anything the violence is kind of irrelevant.  Violence doesn’t make a film good or bad.  It’s the protagonist’s spiritual growth and overcoming adversity that makes for a good story or film, and this film has no spiritual growth whatsoever.

Well, I guess you could argue that it’s a morality tale that includes the audience as a character, and it’s our spiritual growth that the director is trying to achieve.  It would be a valid point except there is no catharsis.  The film is entirely nihilistic – the bad guys go unpunished and the cycle of violence continues.

I liked the direction and the build up of tension and the symmetry of the tale – it’s clear that what happens to the family happened to the family’s neighbours before them, and will happen to some other neighbours afterwards.  I was even OK with Pitt’s character breaking the fourth wall the first time, when he asks us if we’re still on the side of the victims, hoping they will survive.  But the film doesn’t end well in any way other than the neat closing of the circle.  As art it is poisonous; I feel it eating away at me, not with guilt but with dread and disbelief.

Oddly, the film mostly reminded me of Mark Millar’s Wanted: same lecturing tone, same nihilistic attitude, same fuck-you message to the audience through the fourth wall.  But that was just about bearable for two reasons.  Firstly it was clearly a fantasy.  Secondly Wesley Gibson is drawn to look like Eminem: 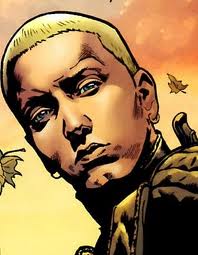 (The graphic novel isn’t great, the film is pretty good and completely different though).

So Funny Games made me miserable.  But on the other hand there’s a statue of a naked guy on a horse with his knob out.  I don’t know much about art, but I know what I like.

« Not The Bike After All
The analogue fetish »