William Duckworth composed the Time Curve Preludes between 1977 and 1978.  And for a long time the only recording of Duckworth’s 24 short pieces for piano was by Neely Bruce.  It was recorded in 1981. 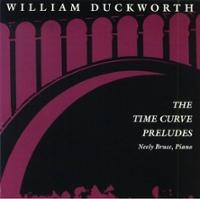 Then Bruce Brubaker recorded Time Curve in 2009.  This recording includes a work in 6 parts by Philip Glass followed by the first 12 preludes. 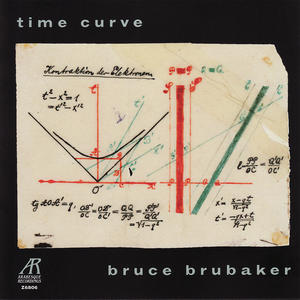 Duckworth is apparently very pleased with it.  I wonder how he feels about the Neely Bruce performance, because the two are really quite different.  Brubaker’s version is slower and less demanding on your attention, and kind of softer.  This is particularly evident in the very first movement – the Neely Bruce version gets off to a flying start and the Brubaker version just seems to idle along – almost lagging behind the music, frustrating the listener with its dawdling.

However the relentless pace of the Neely Bruce recording is a bit fatiguing with its constant demands on your attention.  By comparison the Brubaker version is easier to live with, and though slower the music feels more organised, and communicates more effectively.  Overall I feel the Brubaker recording is easier to get into – I felt like I was holding the other recording at arm’s length a lot of the time.  They’re both awesome pieces of music though, and worth doing the comparison for yourself.

A third recording by R. Andrew Lee is out in October, which should make for an interesting third comparison.  Although his name isn’t Bruce, which may cause a bit of confusion.

« The analogue fetish
String or Nothing »