I saw Until the End of the World in 1991 at the Penultimate Picture Palace.

I’ve had the extended version sitting on the dvd shelf for a while – viewing was always going to be a bit of an excursion at 279 mins long (over 3 discs).  It’s a german release, so the passages in French near the start don’t have english subtitles – but the plot isn’t exactly complex. 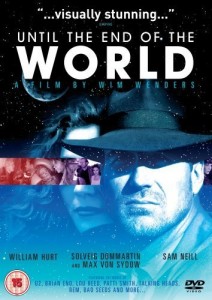 It’s been 20 years since I saw the film.  It may be the first near-future film I felt was “Cyberpunk” in terms of its holistic view on future human society – something that’s conveyed in novels (e.g. Neuromancer, Snow Crash) but few films achieve.  Certainly Blade Runner – which I also saw as the Director’s Cut in the PPP around the same time – doesn’t; that’s just a mashup of cultures in a big city where space exploration and colonisation is implied, but very little of the world outside the city is considered (which is the point).  Transmetropolitan is the same.

It’s neither Cyber or Punk, really.  The trailer doesn’t really convey what the film is about, which is the journey.  Of course there is a spy plot and a future technology plot but these are secondary to the heroine’s travels and her struggle with her own sense that everything is coming to an end.  I’ve never been a fan of the transhumanism side of cyberpunk or space exploration, and I think the focus on world cultures coming together is much more interesting.

Naturally a film made in 1991 about 1999 is going to get technology wrong in a few areas.  There are no handheld mobile communication devices, but there are vehicular based ones, as well as vehicular tracking of entry and exit to cities.  There’s GPS as well.  There are handheld cameras which are not far from reality too.  There is videophone of course.  Information stores (music and personal ID) are in the form of credit cards – I assume with magnetic stripes, given the pre- Chip and PIN era.

The cross-genre soundtrack enhances the sense of globalisation and the vehicular anachronism and choice of locations – Venice, a farmhouse, a grassy plain – make the film particularly vivid.  Overall I don’t think the film is dated, or will be – it’s a fantasy set in an alternate future where technology does not dominate lives as much as it does ours.

And at one point the heroine rides a Pedersen Bicycle. 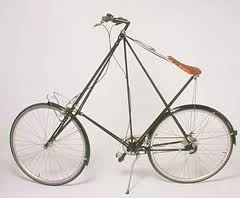 The soundtrack is pretty good with appearences from U2, Talking Heads, Neneh Cherry, Lou Reed… however the film score by Graeme Revell has never been released apart from a few tracks on the soundtrack CD – although one blogger has managed to extract the audio cues from the dvd soundtrack.

« String or Nothing
Style and Genre »