Lace and Steel was written by Paul Kidd and published in 1989.  I tend to think of the game as D&D era but it’s really only a couple of years before Vampire the Masquerade (1991).  Lace and Steel had a second edition in 1998 and then faded into obscurity, which is a crying shame. 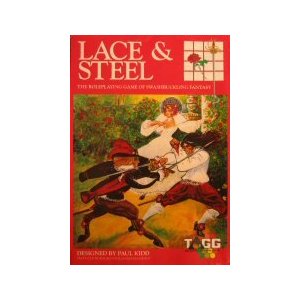 I was introduced to L&S in the 90s, and I admit to being nostalgic.  The campaign was great, the players all “got” the setting and acted in the spirit of the game.  There was humour, drama, tension, and great pace.  Much of this was down to the GM, but also because L&S did several things really, really well.

Nowadays I favour minimalist systems like Everway – this is mainly because I have neither the time or the patience to read through a 300 page manual just to play a couple of sessions.

As I get older I play more board games and less RPGs.  Now, board games are designed with fun and balanced mechanics in mind, with transparent levels of risk and reward.  Why aren’t more RPGs designed like board games?

Which is why I consider Lace and Steel to be a master class in RPG design.  It’s very well laid out and quick to learn for both GM and players.  It also manages to be deep enough for detailed characters, with mechanics that work.  It’s a RPG that remembers it’s a game.

Like many GMs I fetishise the game system, tweaking it, designing my own mechanics.  And like a number of GMs, a better combat system has been my dream.  But also I have a Western Martial Arts background, and the aim of a “better” combat system has always been realism.

Enter the Riddle of Steel.

This game has been designed by Jake Norwood, a long-standing member of the ARMA.  It’s been a labour of love for him to develop a “realistic” combat system.  From the combat section:

This system is based on years of hands-on martial research and training.  Though still a game, it is closer to representing real fighting than any RPG combat system ever written.

I shouldn’t scoff.  First of all, I’ve tremendous respect for Mr Norwood for seeing a 300 page project through, and to applying his own philosophy and research so critically. Chapeau, sir.  And to be fair, when this was published (2002) I only just received my instructor certification – so certainly I lag behind Mr Norwood’s experience as a martial artist.

At first glance, TRoS is just like any other weighty manual I picked up and tried to get enthusiastic about for my own (WMA-based) campaigns.  I have Exalted, Feng Shui, Wild Talents, GURPS, a lot of Old World of Darkness, Runequest, Stormbringer and the obligatory Basic D&D set from my 12th birthday.

At my age I would prefer to spend time writing games than plowing through turgid sub-Tolkein prose trying to learn a rules set that could have been written on a side of A4.  In that respect, TRoS joins the ranks of all of the other manuals I bought because “this time it will be different; the rules system will be a sublime blend of elegance and realism that captures the essence of martial arts” and was subsequently disappointed.

Now, on to the claim of being closer to real fighting than any other RPG combat system ever written. 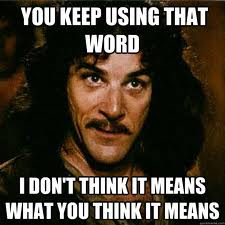 What Mr Norwood has attempted to do is model combat, according to his principles, with more granularity and detail than any other combat system he is familiar with.  Because as far as I am concerned, Runequest is already close enough to “real fighting”.  You will hit your opponent X% of the time, and when you do you may or may not hack off a limb, render them unconscious or kill them outright.  That’s what a simulation does.  Runequest mostly misses out the intervening bits like suppurating wounds, long term disability and chronic pain leading to loss of livelihood and decline in social circumstances.  But I don’t think TRoS deals with that either, and an imaginative GM can wing that bit.

And to be honest, if I wanted a deeply technical simulation of combat I’ll go to our school and fight someone in person.  Which leads me to wonder who this RPG is aimed at.  The people who will care about this level of detail will be experienced martial artists, and those who aren’t, won’t.  So there can only be one answer – this RPG is specifically aimed at Mr Norwood’s friends who spent night after night bitching about how D&D just wasn’t “realistic”.  No-one else gives a shit.

OK, that’s a bit harsh.  Is the game any good?  Well, don’t ask me, ask Lev Lafayette.  There are a bunch of other reviews on rpg.net but (Mr?) Lafayette’s is nicely balanced and summarises the system well (at least, more than I could be bothered to do).

What TRoS has done is polarise opinion.  Plenty of people like the game and applaud its system, and they can’t all be personal friends of Mr Norwood, can they?  On the other hand, Zoe’s review scores it lowest of all for substance:

If you like your combat so realistic that combat is avoided or approached with extreme caution, few games will suite you better than TROS.

Christopher Bradley doesn’t think much of the combat system, calling it “pretty slow”, which I agree with.  Although I’m not sure about this comment:

Helstorm sums up my main objection:

My ability to use the combat system should have no bearing on my character’s ability to fight, but unfortunately, it matters a lot.

p>Spot on, I’d say.  And there’s the rub – a game whose selling point is a totally faithful simulation of combat, and yet it is so dangerous in combat that there’s a good chance your PC will die in the first exchange (unless they are totally mismatched in ability).  And it’s slow, and difficult to learn.

Now, on to my own gripes.

There are a bunch of “maneuvers” and “stances”, and this is where the game starts to get my back up.  You see, it’s been written from the POV of a medieval martial artist, who has a particular approach to martial arts that I don’t 100% agree with.  Reading the system it certainly seems to play the way medieval martial artists like to fight.  I strongly feel that TRoS only tells one side of the martial story; it has no perspective on post-rennaissance martial theory, and its handling of boxing, wrestling and dagger is questionable – these things happen at distances where “stance” is almost irrelevant.

Now, I mentioned Lace and Steel on purpose.  Because I think that game simulates the way rennaissance martial artists like to fight.  True, it lacks the detail of TRoS’s damage system – but I ask you, when did anyone need four different axes of damage, applied to one of several different segments on the body, each with its own sub-segments?  Particularly when the first touch is likely to mean death?

Lace and Steel’s damage system is good enough, and it tracks important things like fatigue extremely well.  I honestly think the sense of realism it imparts is unmatched – based on my experience as a gamer and a martial artist.  And it does so economically, in a way that players can visualise.

But that’s my opinion.  Mr Norwood, whose experience I respect, has a particular view of martial arts from his own studies, and has done his best to write a RPG that models his experience.  He and his fans can probably visualise combat using his model.

What I can’t really forgive then is the utter cack-handedness when numbers are applied.  Characters can be so tough that they are actually better off not wearing plate armour.  Pardon?  Then there’s the use of the White Wolf dice pool, and its total lack of transparency when trying to judge risk.

There’s one example given in the quickstart guide where a man is decapitated seemingly on a fluke; the man is wearing an enormous amount of armour, is very tough, has a good number of defence dice and a very low target number to defend. Yes, he’s very unlucky and his opponent is very lucky – but the margin by which he is killed is equal to the armour he is wearing.  Which means that, under normal circumstances, weapons and armour massively dominate the outcome of what should be a skill and tactics based game.  If that’s the case, why have players make such tactical decisions in the first place?  Why not just have good old THAC0 and Armour Class?  Because the founder of ARMA, John Clements, says it’s not “realistic”.

But above all, any tactics in the game seem to come down to “I have X number of combat dice, I’ll spend Y to attack and the rest to defend”.  That’s an idea straight out of Rolemaster.  And while I mention it, so are the critical hit tables.

A more charitable view might say that all games boil down to a single coin toss, and it’s the illusion of tactics the game provides that makes them fun to play.  And I say fine, if TRoS is just providing a framework for an exciting combat system.  But if that’s what you want to do, 300 pages is a tad excessive.  And saying your game is closer to real fighting than any other RPG combat system ever written is asking for it.

Overall TRoS isn’t a bad system, and I assume once you’ve invested the time to learn the maneuvers combat is quite quick.  But I don’t think any of my players would have the patience to go through learning this combat system.

And that’s why Lace and Steel is a far superior RPG in every respect.  Not only does it do combat well, it does magic well, and social interaction, and it’s a nicely laid out book.  It’s a roleplaying game that knows it’s a game, that people will want to read quickly and start playing.

One thought on “Steel and You”