Next to Call of Cthulhu, Chill was always going to have a hard time. 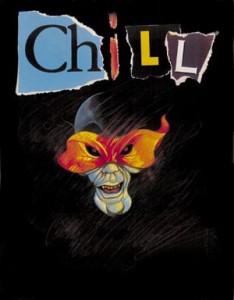 I have the second edition, which is actually quite nice – a matte hardback cover, an introductory booklet in its own pocket inside the back cover, some nice glossy full colour pages in the middle with a map of the world showing places of interest, and distinctive art by Joe DeVelasco who also did the cover art for a number of supplements. The art reminds me of Duncan Fegredo’s Kid Eternity.

Chill doesn’t waste time getting to the system, unlike some games I could mention. That’s not necessarily a good thing, though.

Given how promenent the system is at the front of the main book, I wonder if they were consciously trying to differentiate themselves from CoC’s BRP system. I don’t know what the 1st edition was like (I have a feeling it was much more Hammer Horror) but Chill 2e used a couple of very interesting skill mechanics. Firstly skills came in 3 levels – Student, Teacher and Master – which just provided bonuses on top of their base score which was derived from attributes.

Secondly, success levels were derived by comparing the Target Number (lower equals harder) with a line on a table, and a percentile result then tells you whether you have a critical, high, medium, or low success, or a failure. These could be worked out with a simple formula. A very nice system that I’ve adapted to BRP, with only one drawback – whenever the GM applies a bonus or penalty to the roll, you have to work out the C/H/M/L/F thresholds, so the table was kind of essential.

The middle of the book has a timeline of the SAVE organisation as well as the aforementioned maps, giving the game a global feel that contrasts with the isolation of CoC. This game pre-dates The X-Files by a few years, but that’s the sort of vibe I get – a Monster of the Week game where the characters investigate the supernatural in a world that denies or ignores evidence at the behest of a secret organisation.

And it’s monsters where the game really shines (much like CoC). The main book has a selection of interesting creatures. All have a link to the Unknown, hinting at some kind of supernatural organisation that is absent from CoC. But even better are the focused sourcebooks that cover vampires, lycanthropes and Apparitions: 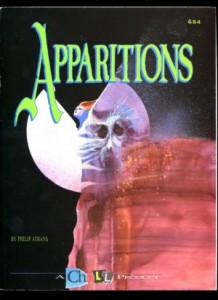 I only have this sourcebook to comment on, but I’m impressed. If I wanted to run a campaign focussed on ghost hunting, this has everything – a list of different ghosts and spectres with case notes and “medium’s comments” for each type of apparition. I don’t know if the other “creature supplements” are as good but this one sets the bar high.

I also scored a copy of the Chill Companion in a charity shop. While I don’t care much for rules expansions – they tend to add complexity or take away game balance – there are a few nice bits like the discussion of horror subgenres, and when to mix and match in your campaign.

I think Chill offers a lot, but is hampered by a rather arcane system which is over-emphasised in the main book. The real value is in the supplements, which can probably be made to work on their own.

The best thing about Chill is its obscurity. It doesn’t have the baggage of CoC or the WoD or the obsessive focus of Kult. The SAVE organisation is a bit corny but as a platform for supernatural investigation it works better than the alternatives – at least for party motivation and cohesion.

A 3rd edition of Chill was planned for a while, but it looks like that will not be. A shame, because it’s probably run by devoted fans. The 3e cover looks like a Cthulhu me-too, though. 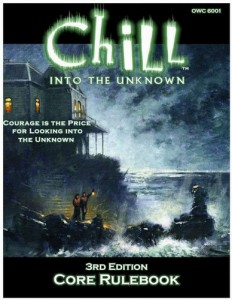 Afterword: this blogger reckons the Mayfair Chill came out after the X-Files, but my version says 1990 (pre-Vampire) and the X-Files came out in 1993.