Back from the ‘con. That’s what we call the annual get-together of RPGSoc alumni and friends where we spend a week playing each other’s games.

So, a lot to talk about. I ran two games that I enjoyed and that the players went to great pains to appear enthusiastic about, saving their sneers and derision for when I had gone to bed. Which was nice.

I also played in two LARPs and two tabletop games, all very fine games. One of these was Dogs In Human Resources, a pastiche on Dogs In The Vineyard. I was completely blown away by the system and the approach to investigation and letting the players make their own choices. I think it could even be called a gaming epiphany.

One of the things I wanted to do was “fight club” where we compared several different RPG combat systems. There wasn’t too much time but I collared experts on Burning Wheel and Exalted as well as playing through a bit of Lace and Steel and talking about Feng Shui. More on that later.

There was the usual socialising, drinking, and playing Guitar Hero. I have now succumbed and ordered Guitar Hero 5 for the Wii. With practice I may embarrass myself slightly less next time.

Last year I wrote some rules (with a follow up) on how to structure a one-off, and this time I think I stuck to them pretty well, with positive results. So I’d say they’re good rules.

I realised a couple of other things.

Consider how players interact with each other and with the GM.  Let’s say there are 2 axes of interaction – one Player to Player, the other Player to GM. 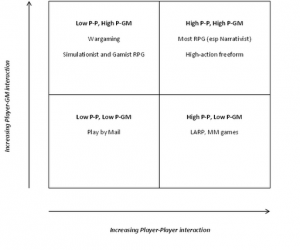 Just to clarify – low P-P and high P-GM doesn’t necessarily mean the players aren’t talking with one another – it just means that the P-GM relationship is dominant. Also this table doesn’t mean the bottom quadrants are less work-intensive – they are probably more work, especially up front. But during a game the best LARP GMs hardly interact with the players at all because they’ve balanced motives and strengths in their PCs and can let them run free.

I prefer games where the players collaborate rather than conspire against each other – mainly because I’m a very bad conspirator. That’s the main reason I don’t like LARPs much.

My ideal game (both as PC and GM) is a high/high interaction (upper right), typically in the form of narrativist tabletop RPG. If that sounds like a lot of work – well, sometimes it is. But for me the very best game is one where all the players and the GM are engaged in the story and contributing to it.

Now, if a GM is happy to run a tabletop in the top left – essentially as many 1-2-1 interactions with her players, that’s fine. On the other hand, running games to schedule takes GM energy and if that energy is being drawn away because GM-player interaction is dominant, that can interfere with the experience. I think there’s a case (at least for 1-off games) to try to maximise player-player interaction.

Now there are several things that take up GM time and can push the dynamic into the upper-left quadrant. Here are a few I can think of.

p>Items 1 and 2 in themselves don’t give rise to this problem, but they can do in extreme circumstances. A golden rule is that a one-off is not a good place to introduce a complex system to players.

Item 3 is a problem, I think. Back-plot is never bad, but if the players have to wade through 6 pages of A4 there’s a risk they will miss goals and crucial interactions. They may be so overwhelmed with the background that they don’t know who to trust. That’s a good way to turn a party into a pack of loners.

Which brings me to item 4. When 1-2-1 interactions in-game dominate the GM’s time they take time away from other players and from the GM’s time to think of and expound on plot. Given that most gamers are geeks and introverts used to working things out on our own before asking for help, this is our default state. Therefore, don’t give the players the opportunity to be loners.

Some PCs will want to rush off on their own and try to solve the plot even when they’re clearly unqualified. I think this behaviour happens when a difficult puzzle appears – there’s no obvious way for the PCs to move forward, so the party fractures and each person tries random skills from within their ability set. The only way to avoid this is for the whole party to have a clear view of each other’s strengths and collective resources (so cut down on extraneous background). Even then the loners will want to hare off down dead ends without telling anyone, so best to manage this with a limited play sandbox and some common goals to attract them to the other PCs. Having some PCs as leader figures can help.

And finally there’s #5, over-narration. I am guilty as charged. This is a case of the GM making a rod for his own back – so stop talking and listen to the players.

« The Shared Experience
How To Kill Your Party »