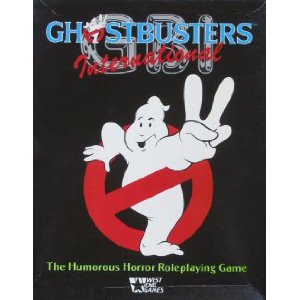 Everway is so awesome it’s created a sort of blind spot in my memory. Before Everway all RPGs were clunky, elaborate systems with big stats, skills, and lots of complicated dice rolling.

But Ghostbusters came first. And at the time I never took it seriously, because it was a “comedy game”. It worked fine for the one-offs (like the Aliens vs Predator in the Wild West game). Now I can’t get enough of this kind of system.

Ghostbusters International was my first introduction to a properly minimalist game system. PCs were defined by four attributes (Brains, Muscles, Moves and Cool) each of which had a Talent – something that conferred a bonus to your dice whenever that Talent applied. Sounds familiar?

GBI did a couple of other things. Firstly it had the Ghost Die. You always rolled the Ghost Die as one of your dice – if it came up with a Ghost, that meant bad stuff (even on a success).

Secondly, it had Brownie Points. You had a limited supply which you used to buy extra dice to augment your rolls when you needed them. But you were also rewarded with Brownie Points by succeeding in missions – and if you got enough you could even spend them to bump up your stats.

Then there were Tags and Goals. Long before Burning Wheel’s BIT system or Summerland’s tags, GBI established a system of writing simple descriptors to define your character’s appearance and motivations – with no in-game function other than telling you how to roleplay.

This was 1986. Almost a decade before Everway, which in the words of Rob Barrett “prematurely anticipated the present day market for rules light gaming”.

And allegedly it was the first dice pool game. A forerunner of WEG Star Wars, it also inspired Jonathan Tweet to make Over the Edge, and Mark Rein*Hagen to do Vampire.

And that is why it must die.

When we build a time machine we will go back and ensure that it never sees the light of day. The Storyteller System will never come to pass and the dice economy will not be distorted in favour of d10s.

Hell of a game, though.

« How Not To Run A Game Business
Rule of Four »