Tonight we went to see The Hunger Games: 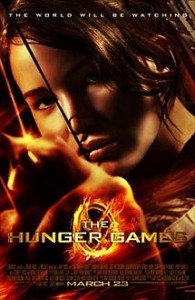 Utterly predictable, far too long to get to the killing (most of which happened off screen), a lot of wasted plot opportunities and fairly uninventive murdering. I can’t think of a single point where the protagonist has to make a moral choice – and at no point is she forced to take an innocent life for her own survival, or made to feel conflicted in her participation. Good soundtrack, though.

The first cinema (the Vue) declined to show the film despite it being listed on Monday night. I guess they didn’t have enough pre-sold tickets.

The Odeon did show the film after an interminable period of targeted ads for zit cream and a “live” NKOTBSB concert. There was a brief intermission when they showed a “red carpet” feature sponsored by M&Ms with banal soundbite interviews from the cast, interspersed with footage from the film. What this was supposed to serve I have no idea. They had my £9.20 plus ice-cream money, so I wasn’t exactly a hard-sell.

After that (which nicely spoiled me for the best scenes in the film) we suffered more ads, followed by the inevitable Orange “turn off your phone” skit and a final anti-piracy message.

This message consisted of an empty, dusty cinema, signifying the “end of the shared experience”, the result of (you guessed it) piracy.

No, people are not avoiding the cinema because of piracy. They are avoiding it because they can do better than spend over the odds for weird-shaped seats and overpriced food and having to sit through 40 mins of ads before they get to see the feature they paid for.