Finally the Black Armada site is live, so I can link to Admiral Rabalias’ Johari’s Window article.

I’m keen on using tools like the Johari Window to express character traits. They require less interpretation than Everway‘s pseudo-tarot spread and allow players to express their character more or less in a way that they prefer to communicate and read information.

There are a couple of ways to achieve this. You could take Burning Wheel’s approach: let the players create all of the cool character background in isolation using the BIT system and then have the GM link all of the bits and pieces of character’s lives together. This provides the “story engine” to generate the overall plot. While this approach is fairly progressive in terms of generating story, it’s also quite “traditional” in that it doesn’t restrict player choice of character much – players get a list of character classes and will generally pick the weirdest thing on the menu, and it’s up to the GM to then bring an unlikely group of characters together.

I prefer a restrictive framework to link the characters together – as part of a family, organisation, or throwing them together into a situation. You can do this with the BIT system of course, making it a bit less of a blank canvas. Let’s call this a “closed” vs “open” creation method.

Now on to the tools. 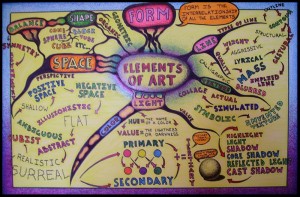 My map isn’t nearly as pretty, because I knocked it up in XMind. 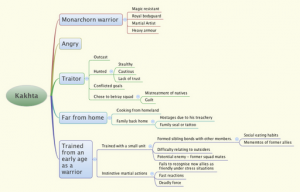 Kakhta was a real character I played many years ago. He was part of an invasion force in another continent, and was part of the nobility or ruling elite in his homeland. He was immune to magic. He chose to leave his comrades and join the resistance (the other PCs), resulting in deep personal conflicts. He integrated with the rest of the party and discussed cultural and culinary differences between their peoples.

I picked five major features about the character, and then used the map to expand on each. I didn’t worry much about order or depth of information – the intent with the mind map is to dump information onto the page as swiftly as possible.

The problem with mind maps is this “brain dump” makes for a slightly chaotic mess that doesn’t read well for play. Some sorting of the nodes was needed. I chose three categories:

Everything else I left black. Some of the items in black could be behaviours or other talents, but their overall impact on play is low.

Once I marked up the mind map it looked like this: 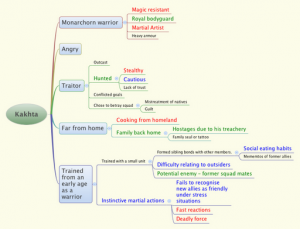 Not a great deal of depth but enough to hang a plot on. Add another colour for physical appearance and you could have a reasonably rounded character.

Of course I haven’t actually said which system I would use. For the Ability nodes I could add percentages (BRP), levels of competence (FATE) or any other descriptor that fitted with the system. In fact FATE might work quite well with this technique since it expects people to be average in skills that aren’t explicitly named – that takes away any need to have stats outside the mind map.

The other thing you could do with the map is to enable characters to grow in areas they hadn’t previously thought of. Let’s say the characters travel to Kakhta’s homeland on a mission to infiltrate the Autarch’s palace. Suddenly we ask questions about what other skills Kakhta can bring to the game. His background as a bodyguard could give him skills his player hasn’t considered yet – but the map enables him to keep some character points back and spend them later in a fairly credible fashion.

« An Ever Rolling Stream
Arborescent or Rhizomatic Multiverse? »