I’ve had the Amber DRPG in my collection for years. Picked it up occasionally, skimmed it, put it back. 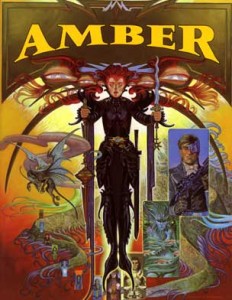 Recently I got around to reading the Chronicles of Amber, so I picked the game up again. Suddenly all of the references make a lot more sense. Mainly though I gave it a proper read because of my interest in running diceless, low complexity but high drama combat. The books are fight-heavy but (as Erick Wujcik notes) Zelazny skips over large fight scenes with ease when they’re just window dressing, but manages to get to the heart of the drama and give a blow-by-blow account when it’s a pivotal fight.

And of course, the combat section follows this premise. In quite a lot of depth in fact, especially since the resolution mechanic is whoever has the higher rank, wins.

Now I can do the fight narration stuff, but the book still does a really fantastic job of showing the GM where to best place her descriptive efforts. It also gives a lot of nice hints on how a weaker opponent might overcome a strong one (through trickery, outlasting them, etc).

It also does really well with five tiers of “relative competence” between player vs antagonist – from clear superiority to being clearly outmatched. The system also suggests some stances (“furious attack”, “opportunistic stand” or “defensive”) which serve as simple markers for players to use as statement of intent. There are a few more choices for sword-fighting or grappling, but all the options are very clearly expressed.

There’s a lot that can be learned for Everway. In fact, my premise for the Battle of Everway was to form a high drama but low crunch combat system, and Amber has pretty much already done this. On the other hand there are one or two things that I don’t care for in Amber: the point-based character generation and attribute auction make sense where sibling rivalry matters, but won’t work for my game. So I don’t think analysing Everway is effort misspent, more that the two games complement each other.

Amber is available through DTRPG for $12, bargain.