How excited was I to hear Ridley Scott was directing Prometheus? 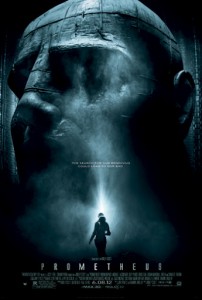 Scott has been (almost) my favourite director since I saw The Duellists on Alex Cox’s Moviedrome. I keep hoping that he’ll do something to equal his last decent film, Thelma & Louise. I don’t know whether it’s poor choices with the script, excessive cutting in fight scenes or just an unhealthy association with Russell Crowe but I don’t think he’s made anything worthwhile since.

In the case of Prometheus my expectations weren’t high, but even those weren’t met. The direction is gorgeous but the script stinks, which I would have figured if I’d realised who’d written it before I watched the film. Half of the writing team is Damon Lindelof whose credits include Lost (I don’t have a lot of respect for a series that can be summarised in 8 minutes).

This is a rant rather than a review, and it contains some spoilers. If you don’t want to be spoiled I recommend the review in The Independent – not Geoffrey MacNab’s inexplicable review (which gives the film four stars despite calling the film “anti-climactic”) but the short round-up from Nicholas Barber, who summarises it all nicely:

if Alien was intended as a spooky little horror movie, only for it to turn out to be a visionary classic, Prometheus gets things the other way round.

p>The problem with Prometheus is it’s trying to be worthy, hard-science sci-fi that tackles the questions sci-fi tackles – like what it means to be human. At the same time it’s trying to cater to the lowest common denominator of viewer, providing 3D thrills, explosions, and monsters. All this while trying to be true to the visual and thematic legacy of Alien.

In Alien the cast’s competencies were based on their job flying the space tug-boat Nostromo. They were hopelessly unprepared for what was being done to them – being duped into picking up a dangerous xenomorph – and acted according to available information and their abilities. Eventually the answers for the alien’s origin came from their android traitor, who told them that the Weyland-Yutani corp knew all about the monster and wanted it as a weapon. There was no need to go into how the company knew about it or what they were going to do with it. All that mattered was the present.

Prometheus is a bunch of pretentious plot ideas clumsily thrown together with no thought to coherence or closure (like Lost). Characters don’t behave believably, competencies are not used logically – either by the characters or by the scriptwriters. The cast are a mixture of scientists and spaceship crew, with the (yawn) corporate oversight character. Yet none of the scientific explanations for their situation come from the scientists – instead they’re the first to be killed in unnecessarily gory ways that far exceed Alien. The best we get is a theory from Idris Elba’s nonchalant Captain that this isn’t the Engineers’ homeworld, it’s a military installation full of biological weapons – and the Engineers plan to send their spaceship back to earth to destroy all the life they created having changed their fucking minds.

This theory suddenly becomes accepted wisdom by cast and creators, as the one opportunity to communicate with the Engineer race ends with violence, murder, and the traitor android getting its head ripped off. Oh, deja vu. 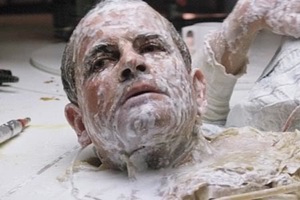 If this planet were not the Engineers’ homeworld, why do the ancient star maps all point to it? Why would the gigantic aliens draw a primitive culture’s attention to a biological weapons dump in space, and communicate it clearly enough to humans that ancient civilisations with no properly evolved language could paint it on cave walls?

As for the rest of the plot – it represents a number of missed opportunities. Android Traitor David is clearly wrestling with the same why-am-I-created question that the scientists are trying to answer, yet his actions are sociopathic. Like Ian Holm’s original Android Traitor Ash he’s at the beck and call of his master, but his mission lacks clarity of purpose. Weyland (Guy Pearce), the hidden master of AT David is an irrelevance.

The final insult is that this film pretends to be a prequel to Alien, even placing the ruined alien ship ready to be rediscovered by the hapless crew of the Nostromo, yet there are visual inconsistencies with the original film – no-one in the pilot’s chair, for example. The corridors in the new Engineer ship are far smaller than those discovered in Alien. And the ending, with a fully-formed Alien bursting out of the dead Engineer’s chest is the worst kind of pandering to the Alien franchise.

Like Lost, this film promises a lot early on – but at some point the writers realise they’ve bitten off more than they can chew and resort to the usual tropes, ignoring continuity and even the plots they thought of at the start. This is straight-to-DVD material that somehow got a big screen airing.