We’re working our way through Angel at the moment. On impulse I ordered a cheap copy of the Angel RPG – mainly on the strength of this review:

I don’t like franchise games, or expect them to be any good – I particularly don’t expect the system to be any more than an afterthought. But from what I’ve read so far it exceeds expectations. 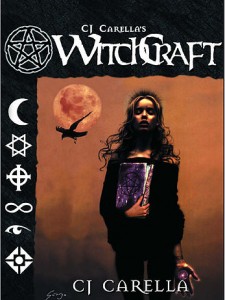 I have to say, I love that cover – although its similarity with the cover of early 3rd Stone issues makes me wonder if it’s deliberately targeting wiccans.

It’s difficult not to see Witchcraft as anything other than a me-too product. It’s 8 years after Vampire and 6 years after Mage: The Ascension, the game that it’s most comparable to. It’s well written, sure, and it has a more coherent framework for a campaign. The layout reminds me of 1e VtM, though the interior art is superior.

Overall for supernatural games you pick your poison. They all provide secret societies, antagonists, monsters and personal horror. If you want something towards the human investigator side there’s CoC or Chill; if you want occult supers there’s Nephilim; if you want modern angsty horror supers there’s the whole World of Darkness. Witchcraft balances WoD’s personal power/horror with Chill’s creature features really well, but it will always be the poor sibling of WoD because it came late.

I do think it has a superior system though, and you can’t argue with free. Interestingly in the post-WoD modern fantasy landscape it’s one place where other games can differentiate themselves from the White Wolf legacy, and I wonder how the FATE based Dresden Files game plays (preview here). Oh, and Gamegeeks have reviews of Witchcraft and the Dresden Files rpg.

I’m not sure if either Witchcraft or the Buffyverse games are being printed any more. There certainly won’t be new Buffyverse game materials written following Eden Studio’s settlement with Fox in 2006. For Angel there’s only the core book and a Director’s screen. 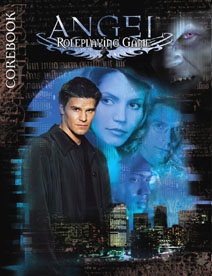 I can see why Kurt Wiegel is so keen on the Buffy game. The Cinematic Unisystem is very nicely streamlined – it has fewer skills, just the right focus on supernatural powers and spells. When I read the system in Witchcraft I was underwhelmed at first, but maybe the greatest strength of this system is it doesn’t get in the way.

Also, the Buffyverse games feature Drama Points which expand on the Fate Point / Bennies concept. Given that regular Unisystem is supposed to be dangerous for combat, Drama Points are a neat tuning device to make a deadly game less so. This fits with an argument I heard about running pulp genre games – if you want a more pulpy game, just add more fate points. The nice thing about Drama Points is that they’re not just for saving against death; they let the players improve their chances in rolls and even direct the plot. I’m not sure whether they should be flying across the table in the way Spirit of the Century intends, but they differentiate between Champions and Investigators very well (the latter has much lower stats, but a lot more Drama Points – plus they can buy more for less xp cost).

The other worthwhile mechanic of this system is the way bad guys can be reduced down to three attributes – Muscle, Combat and Brains. This means the GM

p>The first point means during combat, all of the rolls are done by players – so the outcome of bad rolls is the players’ bad luck rather than the GM’s good luck, and the players then also decide whether to spend those precious Drama Points.

I initially thought of this as a 1-off game – but the Drama Points disparity between Champions and Investigators makes experience points more significant. It’s probably best suited to short campaigns, and I’d be tempted to reward play not with xp but with Drama Points (or a mix of the two).

I can see myself running Buffy/Angel, but will I ever run Witchcraft? Probably not, unless I can apply some of the streamlining from the cinematic system.

Buffy is normally at full rpg price, but Angel can be found for pennies (presumably because it’s so limited). It’s missing some monsters and some magic (which the Buffy line can fill in the blanks for). But come to think of it, there’s no reason some of the Witchcraft monsters can’t be rendered down into Muscle, Combat and Brains and dropped right in. Bargain!

« Prometheus
Nothing more than another glass of wine »