The Times is reporting about a solicitor who was knocked down by a cyclist and left brain damaged while the cyclist walked away with a measley £850 fine.

“It’s about time people stopped worrying about cyclists being killed by lorries if they do not conduct themselves in the right manner. He nearly killed my husband.”

Now OK, it’s an emotive subject. Clearly it appears that justice has not been done. Although the cyclist was prosecuted within the law and hopefully the Hyers will be able to pursue a civil claim (though this is another round of stress for them).

But now the Times has followed up with a story about the need for tougher penalties for law-breaking riders. Sneakily they’ve name-dropped Mark Cavendish at the end, making it appear as if he endorses the penalties. What he actually says is

“I believe I am the first to stand up and say cyclists have to be more responsible as well. Cutting a red light might just aggravate someone who will just take it out on a general cyclist”

p>When you ride a bike, don’t be a dick.

I kind of expected better of The Times after their extensive campaign for safer cities. Was it just fashionable reporting? They also published Matthew Parris’ ill-judged call for cyclists to be garrotted with piano wire.

Now, back to the subject: the law needs to protect and punish justly. But to suggest that cyclists are getting away with murder is ludicrous.

Firstly, a bit of perspective: in 2010 there were 40 fatalities involving trips, slips and falls in the workplace. I don’t want to sound callous but had Mr Hyer fallen over at work and knocked his head, he’d be another statistic.

How many victims of violent crime suffer head injuries?

OK, perhaps a better, traffic related example: if a cyclist is doored by a negligent car passenger, that motorist can be fined up to £1000. The same order of magnitude as the fine in Hyer’s case. The fine is irrespective of injury to the cyclist – and if the cyclist were to pursue compensation it would probably come out of the motorist’s insurance.

The Dangerous Cycling Bill failed to achieve a second reading in the commons in 2011. The CTC provides a good commentary including links to various cases where motorists have been prosecuted for killing cyclists only to receive suspended sentences or small fines.

Now Ms Hyer says “It’s about time people stopped worrying about cyclists being killed by lorries if they do not conduct themselves in the right manner.” Which supposes a burden of guilt for every cyclist killed by a left-turning lorry, and paints us as plainly irresponsible and architects of our own misfortune.

So in the spirit of that statement, I have to ask if Mr Hyer was looking where he was going, and why he wasn’t wearing a helmet. 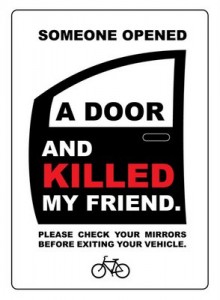 « RPG Spotlight: Continuum/Narcissist
One Rule To Roll The Role »