I’m going to sound like a dreadful fanboy now, but I just got Mountain Lion, and I really like it. 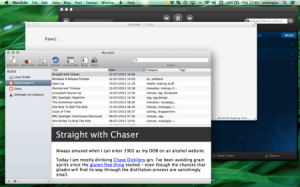 Since my rant on Windows 8 I’ve been eager to see Apple’s effort, hopeful that 10.8 will be the evolutionary, rather than revolutionary release that is expected of the even numbers. Evolutionary because there was a lot I liked when I tried out Lion – I don’t want those features to change.

I’ve also been expecting my macbook to turn into a smouldering slag-heap where Windows 8 pixies dance and point and laugh at me. So far, this has not happened.

Briefest of rundowns on the new system:

p>Downsides? It does seem some of my apps take longer to load now. I don’t know if that’s because the new system is optimised for SSD, or if some core apps are cached for fast loading but the majority of my apps aren’t. Time Machine seems to take a bit longer to start.

The rest of it I can take or leave – the new versions of Mail et al look good and it’s nice that they operate in the way I’d expect to find them on the iPad.

I’m waiting for something bad to happen but so far all my writing apps work and the desktop seems stable. If I were using the mac for more complex creative stuff (like music) I would probably be a bit cautious with the upgrade. My reckless upgrade cost me £13.99.