One Rule To Roll The Role

Timothy Brannan – of the Ghosts of Albion rpg – has a thing for Victorian games. I was surprised not to see the Kerberos Club in his list. 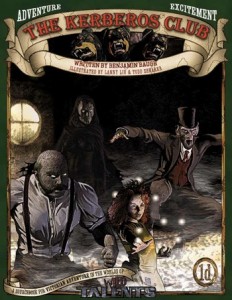 This game pisses me off a bit. Mostly I’m bitter because I bought the Wild Talents version, which is a game I have come to loathe. That doesn’t mean it’s bad – on the contrary, it’s very very good. It’s by Ben Baugh who wrote MAOCT. But the WT version came out first, and then Arc Dream released other versions in simpler, better systems – Savage Worlds, and now FATE.

Eh, face it. I probably wouldn’t use those systems either.

The entertainment industries have a history of getting us to pay for things twice, although getting a Kerberos Club fan to pay for the WT version once and then the FATE version a few months later (after they’d done the conversion to FATE themselves, no doubt) is taking the piss a bit.

Why couldn’t they release a systemless sourcebook and then offer condensed rules that weren’t scattered throughout the book as an add-on? We know the answer – it’s because those extra rules add perceived value to a product where margins are only slightly impacted by a 10% increase in book size.

This is not at all new – we’ve been buying generic games for years.

The first games I played were Basic D&D and Traveller). I only played them infrequently though; by the time I was participating in a regular gaming group, generic systems were in vogue.

That felt like an exciting time in gaming history – where the industry said “go ahead, run any game you can think of – we’ll give you the tools”. Well, almost.

There are two approaches to making a generic system. One, you sell a skeleton system and then genre books on any topic you like. This covers GURPS, Amazing Engine and more recent games like Savage Worlds.

The other option is to sell complete RPGs based on a core system (or engine if you’re pretentious). Since there are only so many ways you can roll dice it’s not surprising that many modern games are franchised systems.

(That makes independent games a rare and precious thing – and at their very best, such games express the game world through their mechanics. But that’s not what I want to talk about right now).

What all of these games offer is vendor lock-in. Buy our game with its cool setting, then you can buy a companion game which is compatible with the first. Pretty soon you’ll be our fanboy. 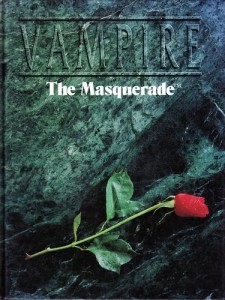 In a lot of cases other “top down” generic systems are playing catch-up with Storyteller for visibility. It wasn’t the first by a long shot, and it’s not very good, but it represented a leap forward in RPG awareness (mainly by joining two geek nations of gaming and music together as one). Today it’s one of many – ORE, Unisystem, d6, and even d20 (Wizards of the Coast finally realising the marketing power of a familiar engine a decade after White Wolf). And let’s not forget Chaosium’s BRP system – which may be the first system to be designed as generic, rather than have the title applied retroactively.

With few exceptions, each game is a round hole and has to be massaged to accept the square peg that is a generic system. And the success rate is variable. The vendors would like you to think that their games are comparable in terms of power levels, and more critically worldview – they aren’t.

I don’t believe the original WoD games were ever conceived as cross-genre. I think they were supposed to be played as isolated bubbles, alternate perspectives on the same universe and not to be mixed together. At least, that’s how 1e Vampire reads. To vampires, lupines are horrific monsters whose sole aim is their destruction. They are the reason that travel between cities is hard and dangerous – they can just smell the vampire from miles off, they can’t be reasoned with, and they will come – and when they do, they get their stats doubled and a bunch of disciplines on top.

1e Werewolf is a dramatically different game, all about spirits and whatnot. Combat plays differently. But crucially garou just don’t care about vampires much. Sure, vampires stink of the Wyrm but so do a lot of things. There’s so much that the garou are cross about that vampires get lost in the noise. Kindred and Garou were never intended to team up and fight crime, and the two books aren’t needed to present each other as antagonists.

But that’s not how the consumer – well, most consumers – will see it. Once you get a bigger and bigger World of Darkness there’s the temptation to stuff as much of the other worlds and systems in as possible. And with a game that revolves around secret conspiracies, it gets awfully crowded.

Also, the GM can only mitigate so much OOC knowledge the players have. I remember one particularly grating incident when a vampire PC walked around a live action game asking if anyone had made contact with the local mages or garou – as if there were part of some supernatural rotary club.

Part of this ranting is my bitterness from years of trying to get the various Palladium systems to work together. In retrospect I think the best of Palladium came from Erick Wujcik (TMNT, Ninjas and Superspies) and the mediocre stuff came from Kevin Siembieda (Rifts), Robotech)).

You live and learn, eh? I finally learned that a good setting is what you leave out as much as what you keep. (I still have ambitions to run Vampire again, but if I do it will be using ORE as a disruptive technique – to use the system to distance the players from the familiar game and thereby ditch the WoD baggage. I don’t have much care for d20 but I applaud Monte Cook for turning the World of Darkness upside down in his version.) 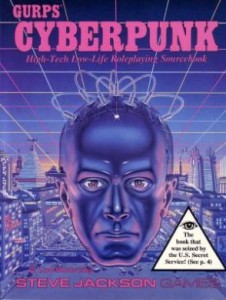 I never got into GURPS unlike some of my friends. When I played it, it was never more than just OK. Sure, I was tempted. It’s flexible and neat to think you can mash up genres just by picking and choosing your supplements. But the system is just peculiar and kind of arbitrary. Rolling 3d6 feels strange. The character sheets are bland.

Weirdly what spoils GURPS for me is the same thing that spoils WoD for me – knowledge that there’s other stuff out there. Example: if I’m playing a low-tech character I objectively know that it’s a broad scope system that’s simulating a low tech level. I don’t feel like I’m immersed in the system.

I have a couple of GURPS books, including Cyberpunk and New Sun. They’re really high quality items, I just can’t get past the fact that GURPS as a whole is genre-by-numbers. That’s not to say I haven’t had a lot of fun with GURPS – I’ve played in several memorable games including a Legend game, an Eternal Champion game and a Warriors game. But they all worked in spite of the system, not because of it.

p>Mostly I’m writing about this because I’m thinking about Unisystem a lot. It presents the same issues – a massive temptation to incorporate anything and everything into your setting. But there are a few things that set the Unisystem line apart from others.

Firstly, the power level doesn’t creep up and up, with the focus on normal or slightly superior characters rather than exceptional superhumans. That’s not to say you can’t have stupidly overpowered zombie pirate ninja dragon apes, but it’s not default behaviour.

Secondly, although the product lines are mainly “top down” i.e. sell a setting and include the same system, most of the games are presented as toolkits for running in different genres. Even in the Cinematic lines which are licensed properties, there’s a refreshing absence of baggage holding the GM back. At the same time each game has enough flavour in isolation to really excite.

I’m cautious about hitching my wagon to the Unisystem star. But it does look like it will do a particular kind of low-powered, urban or historical fantasy well. I don’t mind the system being bland as long as it’s functional (unlike Storyteller) and not clinical (like GURPS). In those respects I think the Unisystem designers really have learned from the past.

Just waiting for the Unisystem version of Kerberos, I guess.

« Cycle of Time
The Gentleman Gamer »