I’ve been kind of dreading writing about these games. 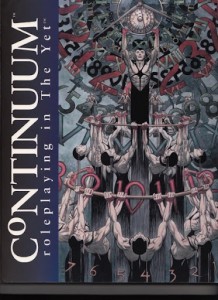 Continuum (or more correctly, Continuum) is a little-known time-travel RPG from 1999. It’s as rare as hen’s teeth, going for astronomical sums on certain popular auction sites, and a pdf or POD is yet to be released. The follow up game Narcissist (Narcissist) has been in development for over a decade, which means the version 0.7 beta pdf is the only version we’re ever likely to see (despite promises of a substantially revised version planned for 2008).

The society of spanners – those who can span time (as opposed to levellers, who can’t) has its own secret Fraternities, a Lexicon, initiation rites, baleful consequences for revealing the time-travelling community to leveller civilisation, a rigid hierarchy of time-spanning elders, an ideologically opposed enemy who is hunted down at all costs, and the ever-present concern of Frag – temporal paradox.

(If the cover art looks familiar it’s because it’s by M. W. Kaluta – who also contributed to Mage.)

Continuum is all about being part of the consensual timeline, and keeping it that way. The Marauders – sorry, Narcissists want to throw spells – sorry, span time as they please, fragmenting the timelines and making reality less rigid and more like it was in the old days. The Technocracy – sorry, Continuum don’t want this to happen and hunt their opponents at any cost in order to keep reality and time homogenous.

The Continuum covers the roles of both Technocrat and Tradition, with new members being sufficiently junior that a lot of the world is a mystery. There are Maxims to be followed, including some creepy and enticing rules such as limits on how far forward or back a young spanner can go without supervision. The Narcissists are both Marauders and Nephandi, being portrayed as time’s vandals, utterly selfish and monstrous.

This is what Mage could have been, if it hadn’t been watered down with factions and traditions and what-not. Of course the focus is much, much tighter, but still.

When I think of Mage I think of The Invisibles, which was the campaign I ran in the mid-90s. But what I really wanted to be running was Sapphire and Steel, with liberal doses of Jerry Cornelius, Luther Arkwright and just a touch of Zenith. People who existed in and could access alternate worlds – to the extent that they classified them with coordinates. Mages living simultaneously, and in some cases only partially aware of their other existences. Time-travellers playing a multiversal Great Game.

So when I look at Continuum, I remember the games I wanted to run. They could have been Mage games, but they were really Continuum games. And then I remember why I didn’t run them.

And everything about Continuum looks like it’s hard work. Probably not actually difficult hard, but very difficult to divorce the game from the necessary crunch. There’s a great deal of accounting incumbent on both the players and the GM, in order to manage Frag, Span, and each character’s Yet. The consensus seems to be that it’s a work of art, a magnificent closet drama for the RPG collector but almost unplayable owing to its complexity and the obtuse nature of its background.

The other problem with this game is that I don’t really know where to begin. Time paradox stories are by definition heavily loaded in design. No lazy GM plotting where you start in media res with amnesiac players in a dramatic scene, introduce a mysterious villain and then fill in the blanks down the line. Inconsistency means paradox and frag, and you need to know what those are at all times.

In truth this game probably has as much in common with Philip K Dick‘s paradoxes as Sapphire and Steel. Humans are the enemy here, not monsters and demons. Although the Antedesertium – the empire of Narcissists/Crashers that created time travel around 17000 BC – fit the profile of the beings that exist “outside time” (actually, they exist in alternate universes that the Continuum refuses to acknowlege) presented in Sapphire and Steel.

Narcissist is no easier to understand how to play, but it does present a really good counterpoint to the core (published) game. It’s currently stalled at version 0.7, if you can find a pdf.

I think my biggest problem is working out ways to cause paradoxes and have them directly affect the players – thereby forcing them to deal with such paradoxes and involving their Yet.

On the positive side, it’s intelligently written and very consistent. It presents several different space-time causal models (including three fallacious ones) that explain very plainly what causes paradox. This is presented in the “Span 1” section of chapter 2; as the spanner level increases more information is presented, including means to ascend the levels. At “Span 2” we learn about Fraternities, “Span 3” it’s mentoring (and travel to the Aquarian age), and so forth. At each level it’s made very clear what that spanner should be doing with their time. By “Span 4” we’re talking about long-range assignments including spying within the Antedesertium.

Overall it’s a joy to read, highly thought-provoking and emotive. I just don’t think I’ll ever have the time and energy to run it. And it needs energy – in fact as well as GM energy it probably needs a strong commitment from every one of the players to work. And this isn’t a roleplaying contract (in the sense of community storytelling) so much as a consensus on time travel and an agreement to work within the system. Unlike a lot of games, this one probably won’t tolerate passive players.

Many games might be called “unplayable”. Some are gonzo-crazy-stupid, some are badly designed, some have excessive rules, and some are just in very poor taste.

Continuum is only unplayable because it’s smarter than me, and I’m lazy. Maybe one day that will change. If you ever find a copy, buy it immediately.

« One Rolled To Rule The Role
Cycle of Time »