Around the start of the 90s, we all went apeshit for modern fantasy-horror where YOU are the monster.

We all know Vampire, the painfully cool game exploring the angst of an immortal superbeing in a gothic-punk1 milieu. Shortly thereafter the me-toos like Nephilim (1992) and Immortal: The Invisible War (1993) crawled out of the woodwork, and towards the end of the decade we have what might be called the “second generation” of such games: Witchcraft, In Nomine, Nobilis – with less emphasis on personal horror and more on urban fantasy. Now we have a diverse and refined third generation with games like the Dresden Files, Sorcerer, and the New WoD titles like Scion (with White Wolf now having to differentiate itself in the market it helped create).

Continuing a theme of nearly unplayable games, Nephilim’s problem is one of occupying time. Sure, it’s great that you’re a reincarnated spirit who has possessed and corrupted borrowed a mortal for your simulacrum and is slowly turning them into a mythological creature in your image. You have all of these past lives, and frankly you’re not bothered about dying, or ageing, and probably not fussed about the lives of the ants scurrying around you. You probably have this spirit-quest for Golconda Agartha going on, so good luck with that. But at the end of it, when characters are fantastically long lived and death has no meaning, why act now? Why not just hang about in your castle or antique shop or wherever pouring over ancient texts for decades on end?

Actually, the Gamesmaster’s Companion has a section entitled “What Do You Do With Eternity?”. Of all of the supplements this offers the biggest bang-for-buck. The Campaign Design chapter is applicable not just to this game but any game in the genre – like the Superheroic Histories chapter in Wild Talents it’s a systemless commentary that’s probably useful to anyone – so if you see a battered copy going for cheap, I recommend it.

Incentive to act will usually come from antagonists – which for this genre2 broadly falls into two camps:

p>Secret Societies fill in the first camp, and seem to be universally composed of conspiracy theorists who are certain the nephilim are up to no good and want to rule humanity – never mind that the nephilim are so passive that it’s a wonder they can run an antique business, let alone pull the strings of world governments.

The second is covered by the Major Arcana – the 22 tribes of the Nephilim. These are barely sketched out in the first book, although they get their own supplement. Tribes is possibly the wrong word since they’re more like the nWoD Vampire Covenants. There’s quite a bit on how the Arcana interact but any real antagonism is understated. Overall it’s interesting and detailed, but it side-steps a number of questions it should be answering – namely what the Arcana look like in motion. 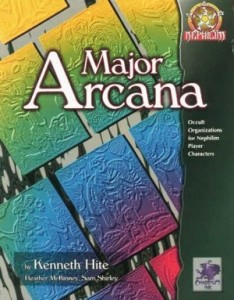 Sadly I don’t own Secret Societies to compare it with the core book content or Major Arcana. However it does look like the core Nephilim book deliberately withholds content for later publication. That’s actually rather unusual for a Chaosium property, but note that this game was licensed from Multisim who have since released much more content in French that will probably never get an English translation.

The withholding of additional setting content is forgivable; but some of the other choices are questionable. Not one but two supplements actually change core mechanics, so I wonder why they weren’t in the book to start with. Firstly there’s the Chronicle of the Awakenings which mainly expands on past lives – including some detail on what some of the secret societies were up to during history – but also completely re-writes the rules for nephilim metamorphoses (changes in outward appearance from human to supernatural). The new rules base the metamorphosis not on a simple power increase but on changes in emotional personality traits – great for roleplaying but I’m not convinced it adds value. It’s just different. 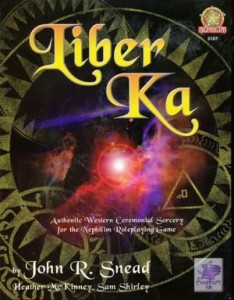 But the most radical change comes in the form of Liber Ka. In the main book each kind of magic is given three tiers or circles, and covers Sorcery, Summoning and Alchemy. In Liber Ka there’s just three tiers full stop (Casual, Ritual and High magic). Possibly these simulate occult practice more effectively but I don’t think they really add anything to the game because, in the end, they’re just a different list of spells – and of limited compatibility with the core book. And my reservations about a game’s ability to simulate combat apply equally to magic. It’s only going to matter to a handful of people whether magic is truly representative of real-world practice. For everyone else magic should be intriguing, resonant, but ultimately a means to an end. It’s the results and how they affect the narrative that matters.

I think this is at the heart of the problem. Nephilim calls itself an “occult roleplaying game”, and it’s pretty uncompromising. I applaud that, I’m just not sure the way it’s been presented is workable. It’s too concerned with occult science and not enough with how humans respond to occult science.

As for the system, it’s Chaosium’s BRP tweaked for a rather complex magic system. All I can say is it differentiates itself strongly from the buckets-of-dice settings. The French 3rd edition has a different system.

Emily Dresner is doing a FATE conversion, although the latest blog post is 6 months old at time of writing. But I hope she sticks with it. Personally I can see a lot of the Unisystem stuff I bought recently being highly applicable – use the Ghosts of Albion or Buffy Magic Box magic spell building, all the ritual magic and rules for supernatural organisations and even the demon-building rules from Angel, or you could use the more authentic occult systems in Witchcraft.

For me the most compelling content is not the occult stuff, it’s the past lives. The book has a load of time periods with a breakdown of careers and skills for each. Handled well, that could make for a mesmerising beginning, planning where the collected PCs’ past lives intersect. But it also makes for a slow start to the campaign; longer than the interminable wanking that is the Vampire prelude. And in the end you’re encouraging a player to add screeds of backplot. If you’ve got the energy for that, and if you subscribe to the Burning Wheel tenets of player belief and instinct driving the whole game, it could be a sublime experience. If you just want to take names and kick ass, possibly not.