I downloaded and installed the Win8 preview alongside XP on my old PC (which I only really keep around for playing Thief).

Now I was probably expecting a bit much when I asked it to run some games, since most of my content is from XP-era and earlier. Steam installed fine but none of the content I downloaded would work. Valve are particularly negative about Windows 8, so maybe this is a symptom of what’s to come.

There are some good things about the new system, and a couple of annoying things. The windows look cleaner all round, like they’ve taken the best aspects of Aero Glass and the Classic borders. I like the start page too:

OK, it’s clear that their primary market is tablets but that’s probably a good thing. The combination of colours and icons is very visible.

The other good thing from a usability POV is that apps tend to be in fullscreen by default (at lease IE is, and I assume Office will be). Not having borders, toolbars and other distractions is a big bonus.

The lack of a start button is questionable (despite arguments that it’s irrelevant) and it’s not hard to work out how to launch applications – however, you need to click between screens to get from the desktop to the Start screen where you can find all of your apps. 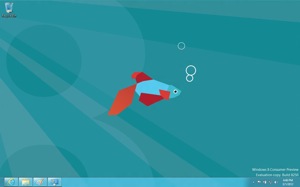 It took me a while to work out why this bugged me so much. Then I realised – in order to open an app in the Desktop Mode, I had to go back to the Start screen by moving the mouse pointer into a corner, waiting for a toolbar to unhide, then clicking on it. So, more clicks.

But it’s the act of transitioning between the start screen and the desktop that’s jarring. Maybe in time the user is supposed to learn to work in one mode or the other all the time. But I suspect the majority of users won’t, and it’s going to piss them off.

OSX managed to implement iOS features (mainly screens of icons) pretty much seamlessly with their core interface, and yet retained both types of program launch options. Win8 doesn’t appear to do either. It seems the Win8 uberOS is trying very hard to look different from iOS and Android, and shooting itself in the foot in the process.

Ugly – We Want Your Details

p>To install Win8 I had to set up a Microsoft Live account. Well, OK, I had to set up an iTunes account to use my iPad. But I didn’t have to do that for my Macbook – there, the app store is optional.

Fair enough, MS didn’t ask me for my credit card details. But it did ask for email address, password, and personal information with me having to opt out of newsletters.

In other words, my PC has become intrinsically tied to my MS Live account. I guess if an internet connection is available, it phones home on boot. I’m kind of creeped out.

So far there’s a lot of bad and not much good. Like all other versions of the OS I may learn it eventually through necessity. But I never, ever used any version of Windows by choice. I always chose to use something else – and I only came back to Windows for games. Seeing as MS no longer have a monopoly on gaming, Windows really doesn’t have much to offer.

The final straw? The new bootloader doesn’t boot NTLDR based OS directly – it requires the machine to be restarted to boot into a legacy OS. Frankly I don’t see the Win8 partition surviving the next 24 hours.

« Open Up
Straight with Chaser »