Man, I said I was done with dice pool systems after ORE. 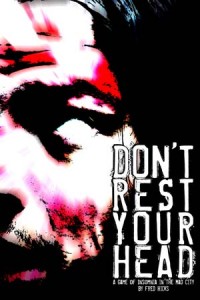 Don’t Rest Your Head is a game about insomniac superheroes in the Mad City. For some reason your PC has stayed awake too long, and something has gone click… suddenly they notice all the strange things that the sleep-deprived see, like an extra door or alley somewhere, or how the children have the heads of ants, or the zeppelins flying overhead…

And the establishment of the Mad City has noticed them too, and wants to kill them. Don’t fall asleep, ever again.

Dark City is naturally an influence:

“[DRYH] tries very hard not to be Dark City: The Role-Playing Game, but it was definitely hard work to avoid it, if only due to the large tracts of cognitive real-estate this movie owns in my brain”

p>There are a bunch of other worthy sources such as Doom Patrol, Neverwhere and several fringe RPGs including Ron Edwards’ Sorcerer (still don’t have my copy, dammit).

If that were all there was to DRYH I’d say “meh”. I could run that game with Mage, or Over The Edge, or Call of Cthulhu. Stories with characters jerked out of their comfortable setting into a violent and surreal characature of the real world are not uncommon in these parts.

But the setting isn’t the star feature, by a long shot. DRYH is a metagame of “dice management”. The only way you get things done and get power is via extra dice, and the only way the GM can “hurt” your PC is through her dice. Contests are won with opposing dice pools, but the GM doesn’t really do anything other than hinder or direct the players when things go her way. No hit points to cross off. It’s all about forcing the PCs to either crash (fall asleep from exhaustion) or snap (go mad by running out of fight/flight responses). It’s so pure in the adversarial way the GM is supposed to treat their players, I can’t think of anything to compare it to.

Each player needs at least 3 white, 6 black and 6 red dice signifying discipline, exhaustion and madness respectively. The GM then has their own pain dice, in whatever colour they like (I choose purple). The dice are d6, and successes happen when you roll low. However you also check which attribute is dominant when you roll – that’s the colour of die with the highest number on it. If the black dice dominate then the player gets exhausted, if the red dice dominate they go insane, and if pain dominates then the GM gets a despair token that they can spend to add or remove 6s to any pool they see fit on any future roll (i.e. to cause a particular colour to dominate). Only when discipline (white) dominates does anything good happen (removal of exhaustion or madness marker). Zathras can never have anything nice.

Madness dice are the same except their use is temporary – once you’ve finished with your madness powers, you can put the red dice away again. It’s only when you’re rolling buckets of red dice that madness is a risk. If madness dominates you tick off a fight or flight response. If you’ve no more responses to tick, you get a permanent point of madness (i.e. you always roll a red die) and lose a discipline point. Lose all three disciplines and you’re a Nightmare and no longer in play.

Character generation is very simple. Players are led through a set of questions including how they appear to outsiders, what they’re like inside, what path their life is on, and so forth. The only crunch is an exhaustion talent (a mundane skill that the character can do almost superhumanly well) and a madness talent (a supernatural power that defies normal science). Apart from that they have to decide whether their Madness responses are fight or flight. And that’s it.

The game is going to be a slow spiral into exhaustion (and possibly madness) – that much is obvious. The interesting part comes from players realising when to spend those madness dice to protect against exhaustion, and can they juggle the numbers long enough to finish the game. Not a lot of campaign opportunities there, unless you refresh exhaustion between sessions.

There are some games where you think “that’s a nice mechanic, I’ll lift that”. DRYH is the complete game; I don’t think you can play any one element in isolation. On the other hand, I can think of lifting this system wholesale for use in another game. But that’s for another post.