Not everthing has to be new to be useful. Adding value can be simply a matter of repackaging an old product; but usually your repackaged product has been targeted at a specific market.

I am not the target market for Old School Renaissance (OSR) games. I may be nostalgic at times but I don’t anticipate dusting off my BECMI D&D set anytime soon.

1e WFRP, on the other hand, does appeal. It’s mechanistically simple yet flavourful. Of course it has the wealth of the Old World background, but that’s not what does it for me.
WFRP feels “dichotomous”. It has a whole load of social interaction skills and stats, but as soon that become irrelevent as soon as the fighting starts. Suddenly the focus is entirely on WS and Toughness, and your Fellowship stat and Carouse skills become irrelevent. They’re different worlds.

Ah, you say, but surely that’s what all games with an over-emphasis on combat do? Well, yes and no. Sure, any game can become needlessly bogged down in combat to the point that it overwhelms the game. But the trend in games is towards homogeneity; combat skills get mixed in with everything else, as if fighting is mechanistically the same as Spot Hidden. BRP does this. Storyteller games take it to the extreme with physical, social and mental traits as three classes of analagous activities. Which they are in an abstract sense, but contextually they are different–the stakes are not the same. The homogenous character sheet where all skills appear to be measured against the same baseline appeals to game designer OCD but it’s not as useful or elegant for running games as we’d like to think. 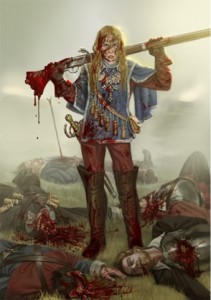 p>Aside from the way Lamentations Of The Flame Princess has been hailed as a spiritual cousin to WFRP–thanks no doubt to Jason Rainville’s 17c-style art–the system not only captures the gritty feel of low fantasy combat, it also re-establishes the combat/non-combat dichotomy. It’s impressively self-aware in that aspect. It’s a superb repackaging of a particular kind of game for a particular kind of player: a few house rules for encumbrance and non-combat actions have been applied brilliantly, and the spells have been tweaked, but otherwise it’s BECMI D&D.

Don’t let the “weird fantasy” label distract you. LotFP shows us is that setting can be up to date even for a 30+ year old system with the right attitude; but the setting is irrelevant. There’s a lot of hype about the baby eating and virgin sacrifice (mostly you can blame Carcosa for that) that distracts from the game’s true value: the way the system focuses on the dungeon. Character advancement is solely based on ability to dungeon crawl, and XP are rewarded on that basis alone–either through defeating monsters or aquiring treasure, the latter being specifically from a monster’s hoard or otherwise “recovered from uncivilized or abandoned areas”. PCs will have lives outside the dungeon, but the dungeon is where the action is.

You can get the “Grindhouse Edition”, sans art, for free. If you want to know what the art looks like, Something Awful has a preview–be warned, while much of it’s good, it’s also very distasteful in places. I think that’s a shame, because the game stands on its own merits without needing to be shocking. It’s good enough to make me think about an Arx Fatalis game. Well, almost.