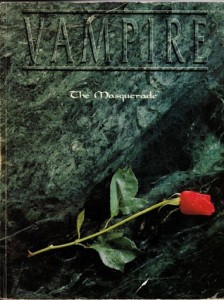 Here are two quotes I found recently relating to Vampire: The Masquerade. Firstly, Lenny Balsera’s quote taken from the responses to Ryan Macklin’s blog post What are your “must play” games for RPG designers?:

Vampire: The Masquerade – The lesson here is about making mechanics synergize with your narrative/genre premise, and what happens when they don’t match. There isn’t anything personal or horrifying in V:tM as a system, except what you bring from how hardcore you bought into all the delicious fiction-y bits, and God, can that go sideways in a hurry when you have different amounts of that buy-in among the participants.

Secondly, the rpgtalk page on Old School Roleplaying has this to say about V:tM:

“VampireTM is only the first of five games in the StorytellerTM game system, all of them based on the same mystical version of our own world, each of them a modern fable. The others are: WerewolfTM, MagusTM, FaerieTM, and GhostTM. Because of their compatibility, it is simple to use one with the other, and together they create an all-encompassing game system.”

Despite Mark Rein*Hagen’s ambitions to make Storyteller a softcore GURPS for the nineties, I always felt that Vampire was meant to be played in isolation. Look at the Wikipedia page for a definition of fable:

A fable is a succinct fictional story, inprose or verse, that features animals, mythical creatures, plants, inanimate objects or forces of nature which are anthropomorphized (given human qualities such as verbal communication), and that illustrates or leads to an interpretation of a moral lesson (a “moral”), which may at the end be added explicitly in a pithy maxim.

The “modern fable” works if the lesson–in this case “personal horror”–remains coherent. The problem with homogenising the WoD is the individual perspectives, and therefore the moral lesson is lost.

There were other casualties of WoD globalisation. The system got fatter and less elegant, especially as power levels were increased. But the biggest casualty was the kindred’s perspective. Lupines stopped being scary and dangerous once they got their own game.

But at least I can look back at some of the VtM1e books and pretend that never happened.  No nasty glossy transparent paper with those ugly railing borders and unsubtle lenarin font.

And we should forgive Vampire for its gothic pretensions and screeds of prose on how to role-play. Yes, Rein*Hagan lays it on a bit thick at the end of the core book; but some of the essays do stand re-reading. It’s notable how much we take the “how to role-play” text for granted these days, when Vampire’s approach was nothing short of revoloutionary.

p>The core book has a very nice chapter on storytelling. In just a few pages it covers plot, theme, mood, ways to build suspense, 13 different kinds of conflict, and 15 ideas for a story. At this stage VtM isn’t mired in its own metaplot, so what you get is a nice, fairly universal vampire how-to. 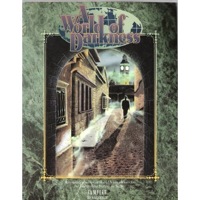 A World of Darkness is the globe-trotting vampire’s guide to the legend; it’s not great. It does offer a comprehensive history of the UK but since I don’t really care for potted histories, I’ve tended to ignore it. Otherwise the authors have picked locations at random. Europe is glossed over in 16 pages (compared to UK’s 35); other areas are Jordan, Hong Kong and Haiti. Quality and utility is highly variable. Reading the middle east section is a peculiar sensation (pre 9/11, post Gulf War). Aside from a few footnotes I think anyone with a reasonable grasp of local history would make a better and more sympathetic treatment of the subject matter. The one area that is interesting is Hong Kong (gaki and cats). 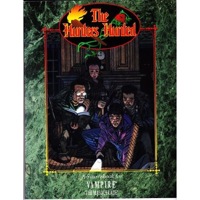 The Hunters Hunted is the first of many hunters books, and it’s very lean. I have three ofthe later Year of the Hunter books, and they’re nowhere near as good value for money: while The Inquisition gives you a lot of depth about the Society of Leopold that you’ll probably never use, and one measley page on campaign ideas. HH on the other hand gives you page after page of motives, methods and hunter campaign concepts; all the stuff you need to drive the campaign forward. Basically HH is about people who hunt vampires, including how and why; Inquisition is about yet another conspiracy. 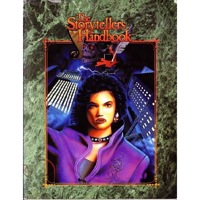 The Storyteller’s Handbook is another high value item. It has a ton of ideas on how to create a chronicle, a city, and a political structure. There’s some filler (I don’t care for additional bloodlines, and the extra antagonists add nothing that isn’t in the core books) but mostly it’s a solid offering. A nice collection of essays at the end, including a discography of Mark Rein*Hagen’s goth and post-punk collection.

I don’t think much of the Succubus Club, which I picked up secondhand recently. It still has some of the innocence of the early books, but it’s basically adventures–and not very good ones. I guess if I were a hipster storyteller running a 90s vampire game ironically then this would be the place to meet up, with its blood dolls and yuppies. But a club isn’t a dungeon; players will not be tearing through uncovering its secrets–so why bother having those secrets at all? 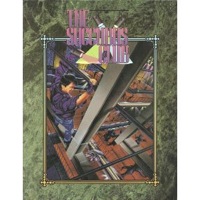 I wanted to like Mummy a lot. It has a whif of Nephilim about it, with the nine parts of the soul and the eternal struggle against the Bane Mummies. But the book isn’t very useful; there’s some magic, but precious little advice on how a Mummy campaign works. An eternal war? Fancy that. Well, we’ve already got one, thanks.

So that’s it for my VtM1e collection. I’ve got core books, a player’s guide and several of the clan books and city books from later editions, but none of them have the charm of the first edition. Also I find the choice of border in later editions unsubtle to say the least. I don’t know how they did it, but somehow the later books are worse for readability.

When I compare 1e and 2e side by side, they’re not the same game. 1e is a neat little fringe game that I picked up on a whim and got some good ideas from. I don’t feel I need anything more than 1e to run a Vampire game. 2e on the other hand is the threshold to a vast conspiracy. Or to put it differently, VtM1e is all about being an outsider to humanity; VtM2e is about being an insider to a huge club of fanged supers. 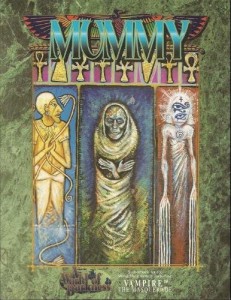