The effect of cables on hifi is controversial. Some people insist that they can be used to influence sound, others dismiss such claims as snake oil. My collection of stereo interconnects is modest (and mostly secondhand from ebay) but from my experience changing analogue interconnects does make a small difference–most likely the more expensive cables aren’t degrading the signal. There’s some science involved to do with capacitance, inductance and the skin effect on different frequencies; this forms the basis for a market with fancy interconnects costing thousands of pounds.

So it’s believable that cables carrying analogue signals could have an influence on signal. But what about those other products? What about digital interconnects? What about mains cables? Since I received one of each recently, I thought I’d share my experiences. 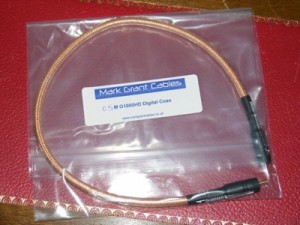 First up, I have a 0.5m Mark Grant G1000HD digital coaxial interconnect. This replaced my 1.8m Belkin “blue series” cable which was way too long and needed elsewhere. I own some of Mark Grant’s entry level interconnects which like the G1000HD use crimped Canare phono RCA connectors. They make a nice secure fit to equipment and have lasted well.

Timing is also essential to a good digital system. If the zeroes and ones don’t arrive in the right order the music will sound disorganised and less “musical”. If the timing is really bad, the whole drum section might appear several hours in advance of the rest of the band. The audiophile then has to remember to play the track later so as not to rend the space-time continuum through paradox. If you ever see someone with post-its all over their hifi rack, you know why.

Thankfully I haven’t had any of these problems with the new cable (I confirmed the integrity of the digital typeface using a font oscillator). Physically its nicely made and chunky. It doesn’t look quite as nice as the Wireworld Ultraviolet 5 but I’m glad I bought a British cable (most of my hi-fi is UK made). Besides, What HiFi thinks the Wireworld cable’s presentation is ill-defined and ill disciplined. Phew, I think I dodged a bullet there.

The only niggle with the G1000HD is that it’s directional. When I installed it the wrong way round some verses or even whole tracks played in the wrong order. Playing Suede’s Animal Nitrate Bernard Butler sounded like he was standing in front of Brett Anderson throughout, and Brett sounded really stressed and pissed off. I did enjoy listening to Revolver with the cable that way round but on the whole things were much better when I put it back in the right direction. 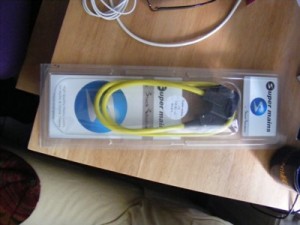 The other cable is a 1m IEC Black Rhodium Fusion mains cable. This was more of an impulse purchase, and I didn’t have high expectations. After all, our electricity travels over hundreds of miles on standard mains cabling, so it’s unlikely that the last metre before the amp is going to make a difference, right?

However, when I started reading up on mains cabling, I came accross an alternative point of view on a certain audiophile forum: don’t think of the power lead as the last metre, think of it as the first metre. Immediately the scales fell from my eyes; with this in mind I was fully equipped to enjoy my upgraded kettle lead.

You’ve no doubt heard that cables can colour the sound. Using this new mains lead Nick Cave’s Red Right Hand took on certain warm orange tones, the soundtrack to Derek Jarman’s Blue aquired an inoffensive green tint, and Pink Floyd turned a sort of brown colour (but I sort of expected that to happen with The Division Bell).

I found I was most able to enjoy the cable whilst browsing the leaflet that came in the box.

So there you have it. Hi Fi is a subjective hobby, and your tastes may be different to mine. But the great thing is there are hundreds of different interconnects to choose from, and every single one has the potential to tune your system to exactly the way you want it.

I’ve been invited to listen to some digital cables next month at my local dealer; I’m particularly looking forward to hearing about the importance of a decent USB cable for computer audio and hearing the difference it can make. I’ve spent years listening through an old printer cable which is probably why I’m getting these “toner low” messages in iTunes.