Since I found the Unisystem and AFMBE, I’ve been after a paper copy of Dungeons and Zombies.

Unfortunately they’re rare as hen’s teeth. When I had to leave the Compleat Strategist empty-handed (they had every other supplement, just not that one) I more or less gave up on getting a hard copy. Ah well, at least the content is still available via DriveThruRPG. But thanks to a certain auction site… 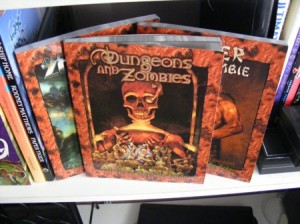 That’s Dungeons And Zombies flanked by Enter the Zombie on the right, and All Tomorrow’s Zombies on the left. The cover is a nice pastiche of the PHB.

DnZ has a superb web enhancement by Jason Vey that turns the supplement into a Cinematic Unisystem game, which should make it nice for not-too-serious one shot games.

The format for the “genre mashup” AFMBE books is generally new characters, rules subsets, and new deadworlds. The consistent presentation is great. I’ll mostly read the deadworlds as closet drama, although there are some great ideas (the Death of the Round Table is lovely). For now I’ll concentrate on the extra rules:

DnZ’s main offerings are new racial qualities for fantasy races, some rules for fighting with shields, and magical invocations. The races I can take or leave, since I don’t care for Tolkein-esque fantasy. The magic is fairly bland but functional; I like the Summoning/Focus/Dismissal approach. Spells are purchased as skills so they work more like discrete powers than flexible spur-of-the-moment sorcery (something that can be addressed using the Cinematic web enhancement).

EtZ brings martial arts, “chi powers”, and rules for zombie PCs. The martial arts are good although they compete with all of the combat moves from the Cinematic lines. Chi Powers are also great; they’re arguably no different from spells, though they have more instantaneous effects and are geared towards the wire-fu genre–they make a very nice alternative to Feng Shui. Zombie PCs are just fun–they’re derived from the main Zombie “breed” of the deadworld, so they could be any type of undead you care to imagine, given the broader scope of Atlas of the Walking Dead.

ATZ has the broadest scope, and covers cyberware, bioware, and nanotech, as well as spaceships, psionics and future skills. There are some nods towards transhumanism, and definite synergies with Terra Primate are possible to achieve something like Eclipse Phase (if that system doesn’t grab you).

Overall AFMBE’s strength lies in distilling and re-stating the fundamentals of genres, enabling rapid assimilation of the rules by players and allowing the GM to mash up genres with ease. That’s a really, really great thing for one shots. I wonder if there are some limitations for campaign play–for example, that the sorcery presented in DnZ lacks depth (something I haven’t found in the Cinematic lines).