A recap on my previous ORE experiences:

Overall my response to ORE has been mixed. In play it’s OK, at best. It masquerades as an elegant mechanic, beneath which lies an unusual amount of crunch. It hasn’t set my world on fire yet, and it’s had mixed reaction from my players. 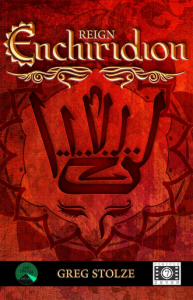 Enchiridion is a “late latin term referring to a small manual or handbook”. The Reign Enchiridion is a utility book with just the rules, no setting. That suits me fine. Know what else suits me fine? The price. The print book cost me 7 quid and thanks to Arc Dream’s generous Free PDF Guarantee I can read the book on my iPad before the paper copy is delivered. The format is digest, by the way, which means it’s not stupidly small for reading on a tablet screen. Bravo!

So the Enchiridion was a bit of an impulse purchase. Aside from the price a couple of other things swayed me. Firstly it’s terrifically well supported with free stuff: sixteen supplements and bits of rules errata, now available in three bind ups all for free in pdf form. The concepts of Martial Paths, Esotetic Disciplines and the very simple approach to spell and monster construction were intriguing. In the supplements they’re untested, but they’ve actually been rolled into the Enchiridion.

Second, it’s setting agnostic. Good, because I don’t want to run in someone else’s setting.

Third, it’s got a really nice character sheet. This was something I bitched about in Wild Talents. It may sound petty, but if attributes directly combine with a subset of skills then the attribute should appear at the top of the skill list, not elsewhere on the sheet. They got that right.

So, what do you get? In a nutshell:

p>The Esoteric Disciplines are fantastic, and remind me of Ki Skills from Runequest Land of Ninja; semi-mystical “powers” attached to a particular skill. Each discipline has five ranks. There are a couple of examples of the Disciplines but the meat of that section is how to build your own disciplines, what kind of effects they would supply, and how to balance the powers at each level. I wish I’d had this tool years ago, instead of trying to adapt bits of Exalted into a similar system.

The Company Rules are also great. These remind me of the faction-building rules in Angel except they deal very clearly with what organisations do, how they fight, and how they get bigger. Obviously Reign has a strong political element. This is a game where your PCs represent an organisation as well as an individual, and the scaling between is quite elegant.

The parts on spell creation are very good too, although with the esoteric disciplines there’s less need for spells anyway.

The Passions section deserves mention. These are the ever-more-popular “negotiated bonus” skills. If your Mission, Duty or Craving applies then you get a bonus die to a given roll, and you get a penalty if you act contrary to that Passion.

Finally, a brief mention on Expert and Master (wiggle) dice. You only ever get one of these per dice pool, meaning that unlike WT where wiggle and hard dice dominate outcomes, these will only nudge the outcome in the right direction. As there’s only one, they won’t complicate the hunt-and-peck for matches too much.

This is the toolkit I was expecting Wild Talents to be, albeit with much more human power levels. A power-crafting system is an opportunity for the players to be creative; but the WT toolkit is so dense that it will put a lot of players off. In Reign the simple five-tier development of Esoteric Disciplines is easy to visualise, particularly as it is tied to a skill; the guidelines for power balancing are clear and comprehensive, making it pretty easy for player and GM to collaborate on discipline creation.

This is clearly a fantasy game; however it could be applied to urban fantasy, martial arts, or even future fantasy. The Company rules would require some interpretation but it’s not too much of a stretch to imagine Companies as Conspiracies in a contemporary setting. Stolze himself has published Out of the Violent Planet as an alternate setting for Reign.

The only bit I’m lukewarm about is ORE itself. Yes, I think Reign is a lot tidier than the other implementations, but the whole buckets of dice mechanic seems to be a gimmick to give players something to do with their d10 collection after they kicked the White Wolf habit. But perhaps that’s unfair, since I’ve yet to run the system.

I balked at using WT for VampORE. Where WT is not quite right, Reign could be spot on with its five-tier disciplines and its rules for power groups. Drop in the madness rules from Nemesis and it could be perfect. Now, what would you call that? Madness Reigns?

If you’re like me and enjoy running your own world and developing your own powers, Reign appears to give a very nice framework for balancing the power levels and tailoring powers to your players’ tastes. The Enchiridion is a great handbook at a bargain price.