The City Accelerator, part one: Introduction

This is the first instalment of a series that considers a new tool: the City Accelerator.

At some point there may be a game that uses this tool directly. But for now, the intention is to have a tool that can be applied to any and every game. Well, any game I care to run anyway.

The City Accelerator frees the GM of distractions when designing a city or other cluster of locations. The tool enables her to maximise impact of her locations in terms of plot, and enables the players to properly visualise the locations they visit. Where applicable the tool also assists in exposing locations to the players at the correct time–such as when they have achieved certain goals or attained sufficient power.

p>Who needs this tool? No one. We’ve been getting along fine for decades with our maps, topological diagrams, or bullet points scribbled on the backs of envelopes.

Hindsight is a wonderful thing, though. The Dreadful Secrets game contains so many locations and people that both GM and players can be overwhelmed. If I were to run it again, what process would I use to make the setting presentable? After some thought, the answer is the workflow I’m going to discuss shortly.

This approach is designed to work for both new content, and existing modules. For generating new content the idea is to free the GM of distractions such as mapping or irrelevant locations. For parsing existing material (i.e. a commercial product) it should help the GM lay out the arena so it’s presentable to both them and to the players. In both cases the operative word is accelerate: the tool should make preparation faster and easier, as well as boost play. 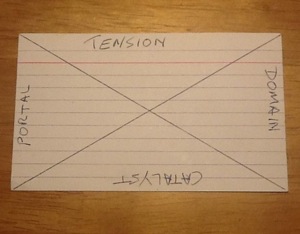 As I’ve written before, I’m keen on cognitive maps and visualisation tools, and how they can be applied to the hobby. For this tool I’ve chosen index cards as a medium to work from–they’re cheap, flexible, and tactile. Post-its and scraps of paper will also work.

That’s it for now. When the series is complete I may bind it up into a pdf, or something. The next instalment will focus on what makes a viable location.