I hadn’t used a fountain pen seriously since I was twelve. I probably should have, because my handwriting lacks discipline and that’s exactly what you don’t get from a disposable biro that can write anywhere.

Just a couple of years ago I got the urge to get a nice fountain pen again. I walked into our local pen shop, tried several models and came out with a Sheaffer 300. 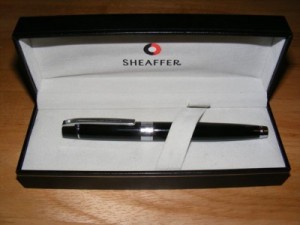 It’s a heavy pen, with a cigar-shaped metal body. I’m pretty sure the cap is heavier than the body, making it a bit unbalanced when posted, so I don’t write with it like that (it’s clearly designed to be posted, with a nice positive click when the cap engages). 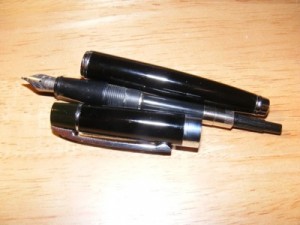 The pen takes cartridges (2 came free, still unused) but it also has a piston filler. Overall it’s a pretty good value pen if you like a really chunky writing instrument.

The Sheaffer got some service on and off for a while, but mostly sat next to all the other bits of stationary in the office. Then my grandmother passed away at a very respectable age. We spent months going through her possessions, which included items like my long-dead grandad’s Royal Engineers uniform, his rolex, and their furniture. I replaced the cheap MDF bookcases in the office with a nice wooden one, and their bureau.

One of the things I took away with the bureau was a Parker 51. 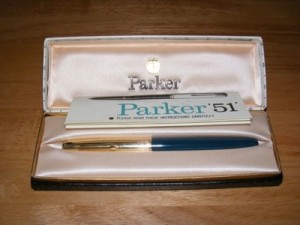 Supposedly one of the “best pens ever made”. I didn’t think much of it at first. I dipped it in some ink and found the nib to drag a lot more than the Sheaffer when I wrote, so dismissed it to the back of the bureau. 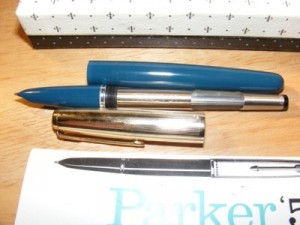 But just recently I’ve been suffering screen fatigue, and I dug out both pens again. They hadn’t been written with in months, so needed a good flushing with water. Once they had been dried and refilled they were transformed.

The Parker is a “vacumatic” model. It’s a good deal lighter than the Sheaffer and has that “iconic” hooded nib. The photo makes it look bright blue, but it’s more of a teal colour. I think it looks fantastic.

Like most modern offices mine is dominated by computers – but clearing the desk proved to be nicely therapeutic. Once I had a clear desk, I began practicing my handwriting.

It has been painful. Painful to hold (mainly in the fingertips rather than cramping; I don’t know if it’s because my fingernails have rotted away or because it needs a delicacy of touch that I lack) and painful to write smoothly and maintain a flow of ink. But I’m getting better. I learned to hold a smallsword*, I can do the same with a fountain pen.

And the stuff that pen geeks say about the pen becoming an extension of your hand is true.

OK, it sounds like romantic rubbish. At home which in my relatively distraction-free office that’s mostly a matter of preference (but at least I can’t get the internet on a fountain pen). But in an office abounding with distracting elements it’s helped me focus.

How do they write? Well, I tried the Sheaffer before I bought it and it’s very nice and smooth. The Parker is equally good, just a bit different; lighter of course, but also with a lighter tone as it marks the paper. It’s just as smooth as the Sheaffer after some cleaning.

I have no idea if either of my grandparents ever used the Parker, but it will get regular use now. The Sheaffer is just as good for writing – which may say something about standards of manufacture today – but the Parker has so much more character. The Sheaffer will get plenty of use at work of course, and will probably do for banging in nails and subduing charging elephants too.

I will try to restrain myself with ink – but I have the urge to get a bottle of Noodler’s Rome Burning to try this out: