Gold on the Electronic Frontier

We’re starting to see more electronic RPGs in digest format, meaning they’re fit for my iPad. A good thing–if I have an electronic copy, I want to carry it around in electronic form–not print the damn thing. Traditional sized two-column books are wrong for pretty much most screens unless they rotate.

The indie press seem to get this. Last week I bought two of those newfangled hippy games from the un-store and they’re the right size. They’re not the only publishers to get it right, of course–a nod goes to Evil Hat for products like Don’t Rest Your Head and Spirit of the Century. Like Hamlet’s Hit Points both of those books are supplied as multiple formats; in fact having bought SotC a while ago I was recently treated to a free upgrade with versions for e-readers–meaning I could read a sensibly-sized text version on my Kindle as well. 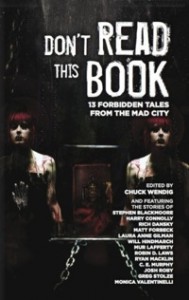 Anyway. Don’t Read This Book is a collection of fiction in the meta-world of Don’t Rest Your Head‘s Mad City. The stories are predictably Twilight-Zone and are a hit and miss selection, but the book mostly gets to the point and doesn’t outstay its welcome. My top three stories are probably Don’t Spill Your Tea (Josh Roby), Don’t Lose Your Shit (Robin Laws) and Don’t Chew Your Food (Harry Connolly). All of the contributions bring the Mad City to life–a very nasty and short life. DRYH is a world for one-shots, not campaigns.

I also picked up a copy of Apocalypse World. The pdf is only 10 dollars until the end of the year, and it’s jolly nice. Admiral Rabalias ran AW over G-Chat recently and it worked surprisingly well. In fact one of the reasons it worked well was the exceptionally tight design of the system, which includes the playbooks. I am a character sheet fetishist, and I have never seen such an eloquent and succinct presentation of the rules and character as one. That and the combination of written moves meant I was never at a loss for what to do.

I don’t have a GM’s perspective on this game yet, but the other thing that really excites me is the hacking community. (I nearly bought the Dungeon World hack as well, but I settled on trying to grok the source before reading something derivative–exciting as DW sounds.) 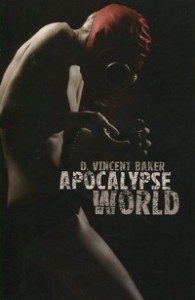 I like mashing up old games and genres with new rules already, but the one place this system can really deliver is fictional character roleplaying–you want to play Amber AW-style, you can just hack the system and develop playbooks for Corwin, Fiona, Bleys and the others. How well their moves are presented will depend on the hacker’s skill, but at the end you’re much more likely to get a version of Brand that’s consistent in everyone’s imagination – moreso than, say, if you’d used Runequest stats.

I’m sufficiently excited by this that I’ve considered a hack of Moorcock’s Eternal Champion, including some of the harder to play and less tangiable characters (maybe recreating the wonderful Dancers At The End Of Time game I played in long ago at Uni). I need a better title than Moorcockalypse World, though. 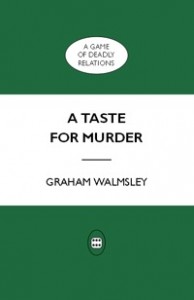 Last item is Graham Walmsley’s quite brilliant A Taste For Murder, something I heard about after browsing for Stealing Cthulhu. Sadly the pdf doesn’t have the faux-Penguin cover, but the art-deco layout is pleasing nonetheless. I’ve not played Fiasco but I understand the concept is similar; the game is GM-less and runs through a three act (well, two acts plus denouement) structure of Group Scenes and Side Scenes. At the end of Act One a character is murdered (and their player becomes the Detective). At the end of Act Two, there should be enough motive stacked up against one or more PCs that an accusation can be made. In the meantime, the players build relationships and attempt to exert Influences over one another. The system is tight, it sounds fun and it’s very well written. The wealth of examples straddle the fine line between comedy and tragedy, bringing Walmsley’s class-obsessed caricature of the 30’s into sharp focus. There’s some useful fluff in the back about the outside world and which parts of that setting apply and which have been deliberately excised (e.g. unemployment in the 30s is acknowledged, but it’s explicitly out of scope for the game). Overall, A Taste for Murder is keenly focused on its goals; I look forward to playing it shortly. Something to enjoy between seasons of Downton.

Interestingly Graham has written both Cthulhu Dark (allegedly in the back of Stealing Cthulhu) and proposed Dark Worlds, an AW Cthulhu hack. Sadly his Thievesoftime.com site has also been hacked so the content isn’t available right now. Instead here’s Kurt Wiegel talking about Stealing Cthulhu.