Robin Laws likes to state the obvious. As he says in the preface to Hamlet’s Hit Points:

If you walk away from this book thinking “Well, that seemed obvious, now that I think of it,” and your gaming subtly improves as a result, it has done its job.

He also makes it easy for a reviewer to explain what his book is about, with an opening chapter entitled “How To Pretend You’ve Read This Book”. Of course I have read the book. Honest. 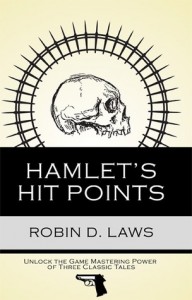 I bought my copy from DriveThruRPG. The file that I downloaded contains not just one PDF, but three: a “PDF Edition”, digest-sized and suitable for my iPad (with hyperlinks), an “As Printed” edition suitable for A4 landscape printing, and the “Big Beat Maps” which complement the written analysis of Hamlet, Dr No and Casablanca. Until we get game PDFs with the same functionality as DK Eyewitness Guides on the iPad, it will do.1

HHP is a system for analysing stories, crucially identifying what makes them work, and how and why the audience engages with them. While story analysis isn’t new, Laws’ system of beats is different from classical story arc theory (differences he discusses in the Beat Analysis chapter). It also looks nothing like the three-act Hero’s Journey of Joseph Campbell (and it’s screen-friendly derivative by Christopher Vogler). That’s not to say HHP contradicts the contemporary three-act screenplay (though Laws does take a swipe at the “overworked end of act two low point”), it just works differently. I can see both tools operating closely together, with the Campbell model working on the macroscopic scale and the Laws model on the microscopic.

Laws refers to classic screenwriting techniques such as Syd Field’s Screenplay, but notes that “the improvised, collaborative nature of the experience [of roleplaying] frees us from the tyranny of structure”. That sounds an awful lot like Ron Edwards’ critique of the WW/Storyteller-era, which I’m not unsympathetic to. Edwards refers to its “monstrous railroading” in an interview on Theory From The Closet (show 008). Much of that interview discusses Story Before, Now and After, concepts which are clarified in the essay Setting and Emergent Stories on the Adept Press site.

Note that while the Forge’s activity happened in the middle of last decade this essay was published in 2011 – after Hamlet’s Hit Points publication in 2010. (I don’t think this is any more significant than the viewpoints are contempories of each other.) Laws refers to the emergent trend2 (“schools of criticism”) of indie rpgs, noting their approach to story gaming was “from scratch, without reference to other story forms and the array of techniques associated with them” and “[their] attempts to foster play [were] abstrusely detached from the principles of story creation as used by practitioners in the fields they’re seeking to emulate.” Ouch. Laws does however concede that “this makes historical sense, given narrative’s secret door approach into our form.”

Crucially, he notes “it would be mightiliy convenient… if there existed a ready-made mode of narrative analysis we could take off the shelf, sprinkle a few RPG observations onto, and call it a day.” But there aren’t.

Setting aside the first and last topics, the practical advice for RPGs is Scenario and Session Beats. The former is an example of Edwards’ Story Before, and follows his traditional model as presented at the start of his essay. I see no problem with this approach, having applied it again and again with success (like just about every GM I know). Laws advises to plan a “hypothetical map of turning points”, which is pretty much what we all do anyway; the drop of gold in the advice is to plan for a variety of beat types, to enable you to time and thus maximise impact of information reveals.

Session Beats are what might be termed as Story After, if Edwards’ use were not quite so derogatory. The idea is this: keep track of the session beats and work out how frequently you swing between up and downbeat. Too much of either in one go will lead to disengagement. This is some of the best, most concise advice I’ve ever read. But pretty obvious, now that I think of it.

There are a couple of interesting comments regarding how players can apply the same methodology, for example in character creation, and during play to make the game a cooperative exercise.

p>I expect to keep coming back to this manual again and again. I haven’t yet gone through the beat analysis of the three works yet–that will be an excellent excuse to watch Casablanca again.

If you’re like me and you like thinking about story, this is a highly recommended tool to add to your kit.