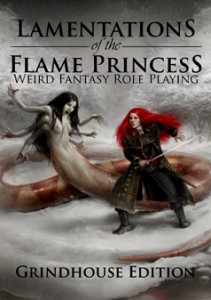 It’s nearly 20 years since I bought a roleplaying game that actually came in a box. (I think it was an on-sale copy of Cyborg Commando, which remained unplayed until I gave it away. As the link says, it’s even worse than it sounds.)

The complete title is Lamentations of the Flame Princess: Weird Fantasy Role Playing (Grindhouse Edition). Since LotFP:WFRP(GE)1 is a bit unwieldy I’ll stick with LotFP. The differences between the “Grindhouse Edition” and the first “Deluxe Edition” (jumped the gun a bit there) are superficial, anyway.

I looked at the free download a while back, and I was really impressed. Excited. Stoked. You see, I’ve never gelled with D&D. It was the first fantasy RPG I owned, but it just seemed peculiar: a flavourless pulp where the streets were littered with magic items, religion was bland and homogenous, monsters cartoonish and illogical. But mostly I didn’t like how everything was so obvious, so commonplace. I started to dislike White Wolf games for the same reason, as the cynical marketing engine exposed more and more metaplot.

LotFP has no setting. It has tone, it has flavour, it has recommended reading, and it has method. All of these speak to me more clearly than a setting ever could. I don’t care for other people’s settings, but a clarity of purpose I like. I respect. And LotFP delivers.

A recap of what I really like about Rules and Magic:

OK. What does the box give you that you don’t get for free?

Who is the Tutorial book for? Mature players don’t need another diatribe on how to play. OSR grognards don’t need to be sold on playing a D&D clone. New players will probably benefit, but LotFP is a niche product and (fairly) expensive2 at that – aimed at people with disposable income who played the red box D&D set when it was new.

Look closer. Look at the introductory solo adventure, the one where you’re slowly introduced to your stats and you have to save vs poison and you meet a cleric on the trail of an evil magic user who kills her and charms you and…

It sounds familiar, because it’s exactly the same adventure from the red box. But it’s horribly distorted. It’s like coming back to the beach you played at as a child and finding it littered with broken glass and human body parts. The poor cleric in the red box gets shot with a glowing magic missile and collapses with a gentle sigh. In this book she gets incinerated by green and orange fire and the last you hear from her is her eyeballs popping.

So the Tutorial is really a knowing wink to the old-timers, even as it’s a pretty good tutorial for the post-White Wolf and WoW generation. And all the while reinforcing Raggi’s personal agenda on back-to-basics dungeon crawling. Very slick.

There’s the obligatory description of play, and finally a nice section on recommended reading at the back which includes Barker, Lovecraft, Poe and Vance among others–each author is treated to a heartfelt essay on what they represent and what they can bring to the game.

The Ref’s book is short and contains what Jim Raggi thinks makes for Weird, what makes for Adventure, and how to write a game his way. Jolly good. For the beginner it’s all solid advice, and for the experienced GM it’s a nice set of footnotes to focus the mind on what matters for this kind of game. The text is long enough, and nicely laid out. The feel of what is being presented is consistent throughout.

Now for the controversy. No monsters, very few magic items. Some people consider this a job half done. My feelings are (i) I totally agree with Raggi that monsters-by-numbers loose all mystery and power and cease to be frightening, and (ii) it’s much more important to me to have two pages on how to build monsters, than twenty on a set of monsters I will never use. I have monsters from other fantasy games I can pinch, and I’d rather think up my own anyway (hence my affection for AFMBE).

The same goes for magic items. These are scarce anyway; I’m not bothered.

Overall the word count is probably substantially less than an equvalent hardback. But I really like three individual books. They’re the right size, the fonts and layout are nice, and the content is split logically between them.

OK, I called some of the art distasteful in my first look. I want to qualify that a bit. I really like the art as a whole in these books–it’s been chosen very well to set a particular tone, right the way from the b&w woodcut style of Amos Orion Sterns to the full colour art of Cynthia Sheppard and Jason Rainville.

There’s only one really grim picture I have seen (it’s the 12th picture in the Something Awful thread). I think it’s a good picture, with great compositon and bold style, but it’s perhaps not in good taste. There’s plenty of limbs being dissolved by slimes and rapiers through eyes and people being eaten alive by zombies, and I like all of those images. Hmm, maybe like is the wrong word. The art on a whole is uncompromising, and it works. That’s all I’m going to say.

Overall nothing speaks to me as strongly as the theme of non-sexualised female characters in military period dress. No cleavage, plenty of action, lace and steel. This is what the cover of LotFP promises3, and I am not disappointed.

Cynthia Sheppard’s art (right) is featured on the back of the pull-out map for The God That Crawls. It’s so beautiful I’d buy the hardcopy for that alone, even if I never run the adventure.

I have to ask though, what did you expect to find down the bottom of a well?

There’s a fairly good rundown of retro-clones here (although the author mistakenly pegs LotFP as “AD&D-ish”).

Retro-clones (as distinct from the 90s D&D derivatives which may fit Ron Edwards’ definition of Fantasy Heartbreakers) are like Linux. At the core they’re the same but the tweaks, bloat, and general tone make for a different experience with varying levels of effort and results.

Two other retro-clones caught my attention. Firstly the monstrous Dungeon Crawl Classics, which I handled while I was buying LotFP. The book is somewhere between digest and full sized, and very thick; something like 500 pages. It claims to be a cross between 3e D&D and Appendix N (I had to look that up). The tone of DCC is non-heroic, and the cover art is gorgeous. But I’m drawn to LotFP for less choice, not more. If I wanted to chew on a modern D&D variant I’m just as likely to choose Pathfinder.

The other retro-clone is Adventurer, Conquerer, King System (ACKS). I can’t say I’m keen on the shiny clean art, though the premise is very nice. The game supposedly focuses on the territory aquisition cycle of PCs going from simple adventurers to landowners and monarchs, which is a neat focus on a different aspect of Basic D&D.

DCC is the Red Hat Linux of the retro-clones, providing feature after feature; LotFP is more like a Debian that’s been stripped down to do one task and one only. Both are very respectable products and will suit different people. It’s great that we have the choice.

What makes a retro-clone not a fantasy heartbreaker? Well, mostly the latter will add layers to D&D to emulate/enable a different kind of play to the one that D&D offers. Retro-clones on the other hand embrace the system and tune it to specific activity with an associated reward mechanism, i.e. dungeon-delving for treasure.

p>It should be clear that I like this game a lot. Enough that I’m inclined to run D&D again, which I never thought I would say. Would I run any other retro-clone or D&D derivative? Not on your life. LotFP meets my goals in a way that my red box D&D (or any other modern variants) don’t.

This is a game that doesn’t feel like D&D at all. Know what it feels like? Alexander Scott’s Maelstrom. I can’t precisely say why; maybe it’s the buff coats, or the personal presentation, or the bare-bones approach. Maybe it’s just the way the books sit in my hand. LotFP doesn’t ask you to buy into the retro-clone movement, or to be a nostalgic AD&D grognard, it just presents a vision and the tools to achieve that. No more and no less.

1. I’d like to think the WFRP acronym is not just a coincidence but a respectful nod, given the historical anachronism of the art, and the general “grim and perilous” tone.