Qualifiers are really just metadata for your four axes; like absolute rankings they’re optional. Their role is mainly visual cues when you present your whole city as a single overview–then they can be used to hilight points of clue, attack, barriers and so forth.

Attacks are the Active qualifiers in this case, whereas Keys and Clues are passive.

Keys are Catalysts that unlock other places. They are always linked to other locations–and usually to Portals. Keys are a kind of Catalyst that the players expect to find if they go to a certain location. It’s always possible that they will stumble over a key at some point–but if they don’t know it’s a Key at that point, it’s more of a Clue.

Attacks are Catalysts that force the PCs to be reactive. They may happen to the PCs as they explore the location, or they may have happened earlier. Attacks are directed at a resource that matters to the PCs.

Clues are a subset of Keys that the PCs are not expecting to find; they ask questions rather than unlock other locations. A Clue is probably unlikely to be found in isolation–it will be accompanied by an Attack or another Active qualifier. 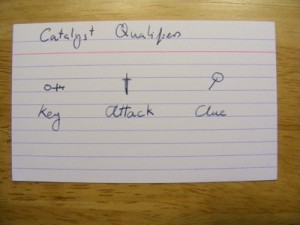 Whirlpools are Active, Balances are Passive.

Whirlpools will suck the characters in as soon as they set foot in the location. A riot or a bar-room brawl are physical examples; a heated debate at the King’s court where the PCs are forced to take a side is a political example.

Balances are tensions that the PCs may upset or even exploit, should they choose to do so. In time, Balances may become Whirlpools. 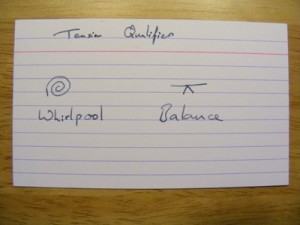 Barriers are Active and Signposts are Passive.

The most important qualifier for a Portal is a Barrier. This is an indication of a hard stop that prevents PCs moving on until they have achieved something (finding a key, resolving a tension, etc).

Signposts are almost not worth mentioning; the point here is that if your Portal is high priority, anything that isn’t a Barrier must be a signpost. The location must telegraph the transition between locations, otherwise the significance will be lost on the PCs. There is the option of cryptic signposts (e.g. the PCs suspect they have entered the land of the dead, but can’t be certain). 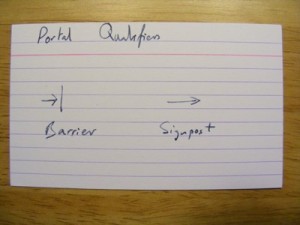 Territory is an Active property, and Stronghold is Passive.

Territory is actively policed; if Domain is high priority and Territorial, the PCs should be actively resisted or coerced upon entry. Hostile animals or human gangs may be considered Territorial.

Stronghold is the passive version of Territory. Strongholds may represent relatively hostile environments if the PCs put a foot wrong, but they can also represent safe havens. Generally the PCs can expect to enter and leave a Stronghold safely if they behave well. The same can’t be said for a Territory. 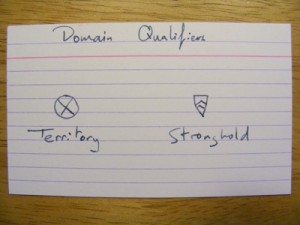 p>Qualifiers should be used sparingly. There’s no point in giving them at all to low priority axes. There’s also no value if they are over-used. If every location is a Whirlpool of politics then the game will be tiring and not at all credible.

I’d recommend using one or two symbols on a card at the most. I’ve annotated my example below with a Key (the Catalyst will give the PCs evidence and therefore permission to pursue Lo-lin) and a Signpost (because it’s obvious where their next destination is). I wouldn’t bother with the other two; if they fail their stealth rolls they might cause tension when the alarm is raised, but otherwise it doesn’t affect the function of this location. 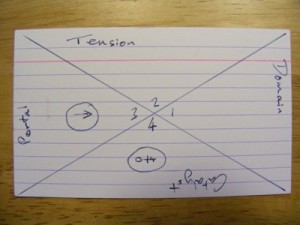