Each location in a game will have parameters that define its usefulness and how it fits into the game or plot.

I’m going to use an elemental model–because I like elemental models, and because they resonate with people generally. We will have four axes of significance for a given location.

The Catalyst refers to clues, events, or anything else that provokes PC reaction and moves the story along.

Tension refers to anything that is already happening that the PCs could become involved with. Perhaps their presence will create the tension itself. Feuds, arguments, romantic interest and politics are all Tension; it isn’t necessarily emotive, though the best Tension will have some emotion in there.

The Portal (or Portals) is where the location leads to. You might question the value of giving this its own axis–since the point of the City Accelerator is to connect locations together anyway. The importance of the Portal is that it connects two different worlds together. It represents a boundary–political, territorial, whatever. For some reason, the PCs need to cross from one boundary into another. Portal will help you decide how easy or difficult that transition is.

Domain is simply who is present. Domain is related to, but different from Tension. Like Portal, Domain is a measure of permission. Either you’re allowed in, or you’re not.

p>The simple approach next is to prioritise the four axes. Which is the most important feature of this location? Is it a clue? That’s Catalyst. Is it the fact that a crime boss frequents the location? That’s Domain. The important question to ask is, what is the number one reason for the PCs to be there, or the first thing they will notice about the location when they are there?

Going one step further, consider Ratings. In the simple system, just rank them one to four, with four being the highest priority (most important).

Here’s an example. The Southern Watchtower of the Crystal City looks out onto the Harzi Wastes. It is rumoured that Lo-lin the assassin escaped through the South Gates, but the Vizier refuses to acknowledge she even exists. The PCs must assemble evidence that Lo-lin did indeed pass through before the government will sanction an expedition that could lead to political tension. 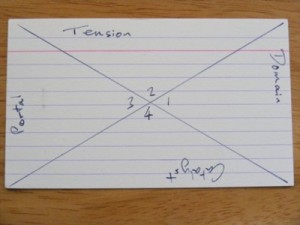 Catalyst is rated highest at 4. In order for the story to happen, the players must be able to prove she was there. Therefore if they go there, they will find a clue without fail.

Portal is prioritised next, simply because the watchtower overlooks the wastes, which is where the players are going. They have the option to simply take the clue and press on if they wish, rather than get official sanction.

Tension is ranked low. There is a slight risk that if the PCs are detected by the City Guard there will be some rebuke or other fallout. The Tension is not high enough to dominate the other factors (it wouldn’t prevent the PCs from either finding their Catalyst or passing through the Portal) but it’s a slight risk.

Domain is ranked last, simply because the people in the watchtower are mooks of little consequence. They might sound the alarm but they’re otherwise unable to obstruct the PCs, and they certainly don’t have anything the PCs want (other than Lo-lin’s hairpin, which was taken as a keepsake by one of the guards that the disguised Lo-lin seduced in order to gain entry to the city). 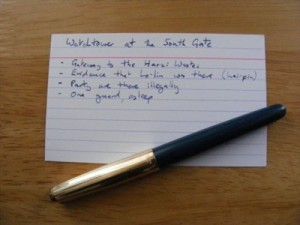 The location is represented by an index card, with the front containing the four ranked axes, and the back with any useful descriptive information.

That’s all for now. Next, we’ll talk about additional qualifiers for the axes, and how they relate to each other.