If you’re quick you can take advantage of the Lamentations of the Flame Princess 50% off sale (in honour of birthdays, wedding anniversaries and Finnish independance).

I did. I bought Vornheim: the Complete City Kit and also Death Frost Doom. 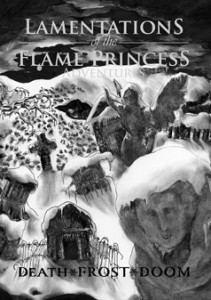 Death Frost Doom is a module, adhering to the principles of location-based adventure and exploration. As James Maliszewski notes:

“If you’re looking for a good signpost in determining where the old school ends and the new one begins, it’s the shift in emphasis from locales to plots.”

This makes DFD an interesting property: a contemporary scenario that takes its structure from the old school, but with a very modern tone. It’s chock full of atmosphere, foreshadowing the gothic and weird tone of LotFP (which it predates–it’s a generic OSR product).

How do you get your party to voluntarily travel to a dangerous location and explore–especially in a game called Death Frost Doom? The answer is your reward structure (something that is praised in the Burning Wheel forum). As noted earlier, LotFP only gives advancement to PCs in two ways:

p>The OSR location-based scenario eschews imposed “story”; as such it comes closer to the Story Now pretensions of the indie crowd than the early 90s rennaissance. It also eschews any system-imposed moral standpoint–one of the concerns raised in Vincent Baker’s lies thread–and something I have no problem with given its Vancian subjective morality.

One of the later refinements of Ron Edwards’ Story Now approach is his essay Setting and Emergent Stories in which he notes there are honest and dishonest Story Before approaches. The honest approach is “Participationalist Play”, which Ron notes is pretty much how most Cthulhu games are run–players encounter ancient evil and investigate at the cost of their sanity, but regardless of their actions the plot has been set and the Old Ones are on a schedule.

This is also true of OSR scenarios in that the dungeon is just waiting to be discovered and plundered; but without linked plot the plundering is entirely at the player’s discretion. Therefore it isn’t participationalist, but it isn’t narrativist either.

LotFP and CoC supposedly share the same crushing cosmic nihilism; however if you tell the players in each game “if you don’t like it, go home”, the LotFP party will either say “but there’s still some treasure” or they’ll say “fair enough, we’ve got enough loot”. The CoC party on the other hand shouldn’t feel they can return to their normal life ever again (whether this is reinforced by mechanics or not).

I’ve said hardly anything about the scenario itself, but if you want to know more then there are any number of reviews available. What I will say is that I bought the scenario (for the princely sum of $2.50) not with the expectation to run it, but to get a sense of James Raggi’s particular take on OSR (both the reward structure, and the Weird Fantasy). Partly I was influenced by the Grognardia review, since it seemed to resonate so strongly with the reviewer and yet was something he found “difficult to talk about”, which is exactly the response I’d hope for in a “weird tale”. On reading the book I do think it’s something that has to be experienced by a gaming group–and probably one whose members played the Red Box BD&D set when it was new. In the spirit of balancing out my slew of new school of indie games I think I’ll give the old school a go and run it to see what happens.

There’s a couple of great comments in the lotfp response to the lies thread. Firstly James Raggi comments:

I figure that PCs in RPGs are pretty much insane by definition, especially in the Lovecraft mold of their insanity being a result of seeing more of the true nature of the world than most people.

Anyone who would go on a D&D-style adventure would have to be some sort of maniac. A sane person would respond: “Crawl down into a dark, dank hole full of monsters and traps and who-knows-what for the chance of getting some treasure? Forget it. I’ll either get a job or go alley-bashing.”

I’m taking my lead here from Howard, Leiber and Vance: in my game, if you’re easily cowed, you can look forward to a short life of grueling labor and ignominious danger, whether you get a job or go alley-bashing or what. If you’re in any way imaginative or bold, like the PCs are, the “sane” life is unappealing! The adventuring life is risky, but the common life is guaranteed miserable.

« Gold on the Electronic Frontier
Apocalypse World, In Play »