The point of the City Accelerator is workflow: how do you construct a really cool space to set your game in the shortest possible time?

For a city, where do you start? Well, you probably consider people first–as in “who lives here?”

Alternatively, you could first ask “what can I see?” This is the approach I’m going to consider. It’s not that factions and characters aren’t important; however when I started thinking about this tool I wanted something to aid the GM in their visual description and presentation of locations. I especially wanted to capture the ambience of CRPGs like [Morrowind] and [Oblivion] (I don’t really care for the gameplay, but they look great).

You could “grow” your city organically, beginning from one corner and then adding logically connected locations. I don’t recommend this, because it will probably lead to a lot of irrelevant bulk and won’t achieve the tool’s aims–namely to build a city quickly and get to the exciting stuff.

I favour a shotgun approach. Here’s how to start:

The bare minimum you should include is a title of one or more words. If the title suggests people, activities, conflict, treasure or other aspects that’s fine. If you absolutely must have extra definition that’s fine–add keywords, a short sentence, or other description on the same side of the card where you wrote the title. When you’re satisfied, put that card on the “in progress” stack and move on to the next one. 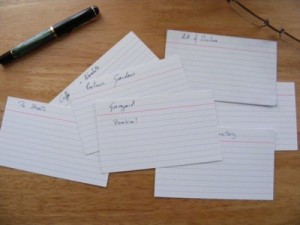 You’ve got a stack of cards that have some writing on them, but aren’t finished. Each one represents a location, with or without context. What next?

This is what I did. I kept writing until I ran out of cards, and I came up with two dozen locations.

First I’ll say that half of these locations do nothing for me. I wrote them down automatically and now I’ve come back to them they fail to resonate. The cards will go into a recycle pile for whatever (e.g. monster record cards for Buffy or LOTFP). 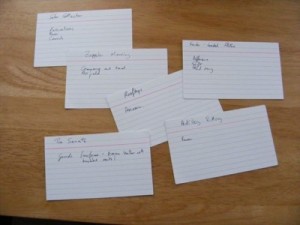 Next, I think of my first district. I started to think about the civic centre. What happens there? Probably transport, government, displays of affluence and power.

While I was thinking of the location I picked up [The Adventures of Luther Arkwright] and looked at the scene in St Peterberg (para 00.72.87).

I chose the Snake Headed Statue as a display of affluence, and the Solar Collector and Artillery Battery as displays of power. The Zeppelin Mooring obviously represents commerce and transport, and the Senate building is the seat of government. Finally the Rooftops are interesting. I want to give the players a sense of looking up as well as around them.

All of these locations are what the PCs will see if they go to this location; furthermore they’re places that they can interact with. I’ve omitted the other buildings around the airfield. I haven’t mentioned the people.

While I think of it now I add other details that the PCs will either see, or they will know. I note that the Senate building has guards in dark brown long leather coats with lots of buckles that cover the lower part of their faces, leaving their shaven heads exposed. I add keywords to the Snake Headed Statue such as “affluence”, “gift” and “mad king”, denoting that the statue has a plaque that commemorates it being gifted to an ancestor of the current monarchy by some alien race. All of this is colour so far, with one exception–I was inspired to write “assassin” on the Rooftops card. I’ll decide why later.

So, that’s my centre of the city, where exciting things will happen at some point. I stack them together as my “City Centre” stack for now. 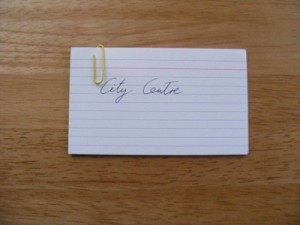 I look at what’s left, and quickly think of a rough neighbourhood of slums and mean streets, where the police have trouble keeping order.

I randomly call this district “Lorms”. It’s a violent, spooky place. However, something’s missing. The Rooftops I used in the Centre would also be good here. No problem: I create another card:

Now, do the Catacombs really belong in this run-down area? Maybe not; I assumed they’d be the tombs of long-dead royalty. But perhaps there’s a vast catacomb that spans the city, and the location in Lorms is just a local entry point. I annotate the Catacombs location and change the name to

OK. I now have my second district. I briefly add a few keywords to each location:

Not all of the locations can be grouped into Districts just yet, but they’re still places I want to set events in. At the moment I really want to use the Opera House. I could go to the trouble of creating a whole new District full of nobles, with beautiful houses and quiet streets.

But I won’t do that. What matters is what the PCs can see and what they will interact with. If the Opera House is the only thing of interest in that location, then it’s the only location worth recording. Instead I’ll bring the colour to the Opera House, noting that it has rich patrons and is a cultural centre for the city:

There’s nothing stopping me from adding to this district of one later (perhaps the Catacombs connect to the Opera House basement).

That’s it for now. Next time, working in the hooks. 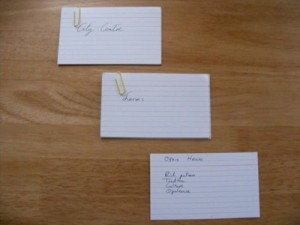 p>Don’t bin all of the lame cards just yet. They may be a name change away from being a useful location. But also, don’t force it. Don’t be tempted to make a location work if you don’t believe in it.