A different city tool here. Vornheim is “not about Vornheim, it’s about running Vornheim – or any other city – in a fantastic Medieval setting. And about running it with a minimum of hassle – so you and your players can get to the good stuff…” 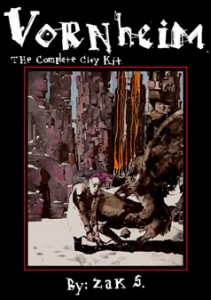 With a name like Vornheim you’d expect it to be the OSR’s answer to Middenheim, not unreasonable given the early modern style of LotFP with its WFRP-esque grime.

However like the rest of the OSR Vornheim has a strongly Vancian flavour. The early part of the book is littered with random details like the breeding of slow pets that enable their owners to display their own indolence, superstitions (“anyone buying a hat for a fisherman will be struck dumb for 3 days”), the lucky number 6 and unlucky 7 (giving the DM permission to grant their players a stroke of good or very bad luck if they roll such numbers on a d20 in the course of play) and other tidbits.

OK, fine. It’s all very entertaining, but didn’t give me much hope for the utility of the book; at best it’s likely to be a closet drama that will sit on a bookshelf (or in my case, my iPad) and flicked through for the odd chuckle.

Next up were some locations, seemingly picked at random. These are (I assume) straight from the author’s D&D campaign, and as printed “modules” they’re stripped of any context Zak S and his group may have felt during play. At least, that’s how I assume they saw light (as someone said of Arduin in the recent Walking Eye Podcast, “hey someone got their campaign printed”).

The locations themselves are fantastic, but they require a paradigm shift for me to use them; location-based adventuring was something I dabbled in at best, and isn’t what I’m used to. I can take or leave set pieces, as I used to when White Dwarf was a proper RPG magazine (i.e. just before I properly got into gaming). Still, I feel the quality is up there with Death Frost Doom.

The next section is peculiar. It’s the reactions of the author’s players to the content; or in other words, here’s some of that context we missed earlier. I’m not sure what this section does other than stroking the author’s ego; although it is entertaining, it’s like reading a load of clever quips at that great party that you didn’t go to. I loved the comments on hairdressers, though.

The next section is the Urbancrawl Rules, and Now We’re Fucking Talking. This section is pure gold, talking about how to quickly map out a location. The approach to mapping out an uncharted space quickly (using actual words and numbers as areas and topological pathways) is sublime; not only is it functional, creating nice twisty streets, it conveys the weirdness of the city as well. The supporting text is clear and expresses the author’s intent very well. The difference between Dungeon and City is laid down in a section called “Moving vs. Crawling”. This is what I paid my money for.

A single page “floorplan shortcut” serves as a nice coda to the previous section with tools to (you guessed it) make floorplans quickly.

Next, a few short bits to do with the law, libraries and so on. There’s some notes on open-ended city adventures, and some further reading and… what, is that it? Usually the bibliography comes at the end. It’s stuffed with the usual suspects (Leiber, Vance, Lovecraft; I was pleased to see M. John Harrison mentioned too, though surprised that Mervyn Peake didn’t get a namecheck).

But it’s not the end, because next we get another treat: God’s Chess. This is a game to be played between sessions, a normal game of chess between a player and the GM but whose final resting places of pieces will denote changes in the political landscape. Fun!

Now, the tables. These occupy a good quarter of the book. They cover randomised NPCs and their connections to each other, aristocrats, books, encounters and so on. They’re not supposed to be balanced or make sense; they are supposed to be entertaining and give the GM a quick route to generating “colourful and useful details”. There’s even a table for “I search the body”. Bravo.

The disadvantages of the PDF are several–firstly the borders are black text, meaning that printed versions will suck up toner, and more importantly the box itself is designed to be a random generator for common encounters and “attacks from multiple foes”. In order to make it work you really need to make a box like this chap has.

Taken as a piece of RPG ephemera to read for amusement alone it’s great. Taken in the spirit of the OSR, it looks tremendously handy for generating a random city as it’s played. Even if you’re not interested in D&D (old or new) it’s virtually systemless and contains some innovative tools for on-the-fly mapping. Recommended.