Let’s think of a general case for character creation. There are two approaches: qualitative, and quantitative.

In the quantitative approach, you generate some absolute numbers (randomly or by point-buy) and apply them to your character sheet according to what competencies you want your PC to have. Min/maxers, OSR players, and anyone thinking of generating a functional character to fill a niche in a party might take this approach.

In the qualitative approach, you start by thinking of the character you’re going to play, and what they’re good and bad at. Effete gothic artsy types might take this approach.

Of course this is gross stereotyping; it’s a guiding preference, nothing more1 and real people sit somewhere between the two poles. Anyway it doesn’t matter which end you started from or why; at some point in the process you’ll incorporate the elements from the other end and the result is a functional character. Hurrah!

I like RPG theory, but I don’t think it’s half as useful as identifying preference. Preference is what drives the GM’s customers–our players.2

I like Everway because it does character generation in a very simple but open way. I think whichever end of the preference scale a player begins at, they are encouraged towards the middle. The qualitatives–players who like to start with cards and images, as the book suggests–shouldn’t have a problem translating that to Elemental bias. The quantitatives have it even easier–they choose  their Elemental skill set then structure their identity around it. It’s all pretty transparent.

I mentioned previously the one job a system must do is bring the PC to life. Now, as much as I love Everway it is not a granular system; it’s almost cartoonish in its application of four stats to define a hero. Much of the nuance of Everway PCs comes from the fortune cards picked as Virtue, Fault and Fate, the images the player selects, etc. The qualitatives will be satisfied; what about those literal-minded quantitatives?

The hero’s identity, their ability to influence the game world, is not just about the strongest element. It’s about priority given to the elements.

I imagined the City Accelerator using a four-axis system because people identify with the number four (including of course its elemental connotations). That’s a system of convenience designed to sort the high value from the low value detail and get the most from the city design–so by definition, you pay attention to the two highest priorities, and just ignore the others. That approach works for Everway characters, too.

Let’s consider a rudimentary map, with Fire at the centre (as the highest priority): 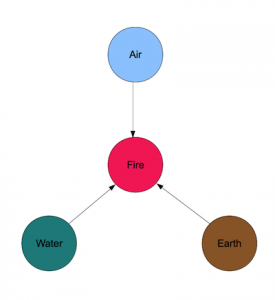 Now consider how the player might see their character, depending on which element is the second-highest priority: 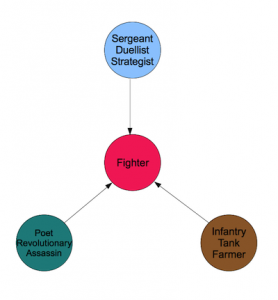 Some of these labels suggest how your fighter goes about fighting; others suggest history, a mental state, or a vocation.

Now consider how your fighter goes about fighting: 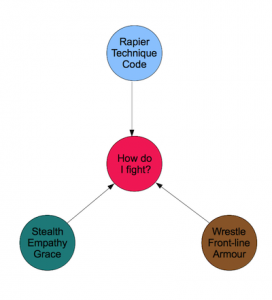 This is more focused on the act of combat. Some words will strongly affect the outcome in certain circumstances; others have absolutely nothing to do with the act itself, but could determine how the PC deals with the outcome (e.g. “Code”, “Empathy”).

Both of these are important for how a player sees their character, and how they present themselves when doing certain actions.

The goal here isn’t to teach experienced roleplayers to suck eggs–they know how to answer all these questions and present a solid, three dimensional character. I’m suggesting a way for the GM to invite the players to talk about their characters and present them as not only I am, but also I do.

p>If you want to create new questions, why not adopt the spirit of the Everway vision cards? If the player has generated imagery, use it to inspire questions (because the player probably already has answers).

1. And if you think about it, the first decision a D&D player makes is “what class do I want?” which is a qualitative choice.