Say you’ve got a bunch of cards, stacked into Districts as the product of an afternoon’s planning (and possibly drinking). What next?

OK, back up a second. Let’s define a District:

A District is a discrete collection of Locations, with defined Entry and Exit Points.

(On that nomenclature: if you don’t like the word District, feel free to use a synonym like Sector, Quarter, Cluster and so on.)

Taking that a bit further, a District has its own mood, current affairs, events, themes and so on. Yes, many of those may spill out into other parts of the city, kingdom, continent, whatever… but the District is where it begins, and where the PCs will come into contact with that mood, those people, those catalytic events.

Therefore, a transition between Districts must be accompanied by a change in mood and tone that the players notice. You may laugh that the players could be so oblivious (“we’re in the sewers? What happened to the Cathedral?”) but I have both been that player and GMd that party.

A District has defined Entry and Exit Points because even when it’s easy to travel between Districts, it should not be trivial. At the very least time passes, money is spent, Travel Fatigue rolls are made, etc.

Those Entry and Exit Points are where the Portal attributes come in.

Portals are either barriers or signposts. Either way they mark a threshold between one District and another.

In Part 6 I ranked the 6 locations in the City Centre. Three of the location cards were ranked 3 or 4 for Portal:

I already decided that the Rooftops go to the Lorms district. It’s not a stretch to define the other two:

Both of these are considered their own District, with their own Mood, Tensions and so on. Neither needs to be more than one location, although I could expand the City Airspace according to compass points, to help map the air with the surrounding terrain. This might matter in the future if the PCs choose to leave the city via zeppelin, but for now it doesn’t need further exposition.

(another interesting point; it may be necessary to consider Districts within Districts for, say, the interior of a large zeppelin travelling in a particular direction. Something for another time.)

I’ll set aside those two locations and focus on Lorms for now. But before I go on, there’s something very obvious missing in the City Centre–the Streets.

Whoops, I should have spotted that.

Well, GMs are human after all. Sooner or later–and probably during play, helpfully pointed out by your players–you’ll realise a gaping hole in your city. Don’t worry. The whole point of this tool is to focus on what’s important for the world and the game and not worry about details that may never come up. But now we’ve decided the Streets are important, it’s trivial to add a card for them.

The Streets are a location like any other–if you’re in that District, you can enter and exit that Location freely. I give them a Portal 4, Domain 2, Tension 3 and Catalyst 1; Tension is ranked highly due to a strong civillian crowd anticipating a state execution.

Clearly the Streets need to lead somewhere. In fact they form the foundation of the city’s infrastructure, and will have equivalents in all Districts. I’ll discuss that later.

Locations in Lorms (from Part 5):

I went through each location and assigned axes as I saw fit, then put the lot in a table:

It’s a bit heavy on the Domain side, but that probably only represents two or three power groups at best–the Law will be concentrated in the Police Station and Prison, and organised crime will be found in the Abbatoir and Slums. As for the Graveyard… that’s something else.

The defined Entry and Exit points for Lorms (locations we have ranked 3 or 4 in Portal) are:

According to the earlier scheme, a ranking of 4 indicates something the PCs must react to if they enter the location, and a ranking of 3 indicates something if they go looking for it. With that in mind the Catacombs must be something big and obvious. A big under-city populated by the undead is a massive cliche, but I like it anyway. I decide to rip off Thief: The Dark Project and have the Catacombs lead to the haunted Old Quarter of the city. In my original shotgun list I had a card called “Hall of Shadows”. Until now I didn’t have a clear idea of what this location is or does, but if it fits anywhere in the City it fits here. I add the Hall of Shadows to a new stack called “Old Quarter” and call it done for now.

With the high incidence of organised crime in this District, the Abbatoir makes a good front for a criminal gang. However while Lorms is a haven for violent opportunistic crime, organised crime is something different. If the PCs look they’ll find the true criminals hidden away, but they’ll also be entering a different District where the rules and the mood are different. I call this “Lorms Underworld” and create a new stack. This is the place that the Police don’t go.

Here’s where it gets slightly complicated. Lorms Underworld effectively overlaps Lorms in space; however the locations in Lorms Underworld aren’t normally visible in Lorms because they’re nondescript areas used to hide criminal activities. PCs enter the Underworld by aquiring membership or familiarity with the criminal element; at that point the Underworld locations are revealed. If you’re running a police procedural game in this city then at some point you’re going to amalgamate the Lorms Underworld with the rest of Lorms. But early in the plot, you will want to keep them separate.

Now we need to consider the Streets and Rooftops. It looks like this city does have a rooftop “Thieves’ Highway” in addition to the streets; availabiliy of Rooftop locations will depend on how closely spaced buildings are. It also begs another question–what new Districts can be linked to the Rooftops and not to the Streets? Just for the hell of it, I think of a new District location called “Sky Shanty” and write a card for it; this will be a community of scavengers living in dwellings suspended above the forbidden Old Quarter.

At some point the Shotgun creativity phase will no longer be enough to hold the City together. So far I’ve been thinking of cool locations in isolation, but gradually I’ve moved to thinking about whole Districts. This is expected for the creative process–after you’ve created a few Districts you start to think not about the City as a whole, and what it lacks. Commerce. Rich People. Poor People. Transport. Entertainment.

I know instinctively that my City needs a Merchant quarter and a Noble quarter. Maybe it has an Industrial quarter as well. That’s fine; I’ll start off stacks for each of them. However, I will resist the temptation to populate them for the sake of it. This tool is all about economy of effort. If the PCs are never going to the Docks then you don’t need locations for the Docks; it’s enough to tell them that yes, there is a Merchant Quarter in the city and the bustling docks are visible on the south side. Until the plot requires it, don’t put too much effort in.

“Make maps like crazy” is good advice. At some point you need to make sense of your new creation in 3d space. Maps help with a lot of things–from identifying blanks to drawing attention to dominant forces.

Here’s my map. It took all of five minutes (don’t get your hopes up). 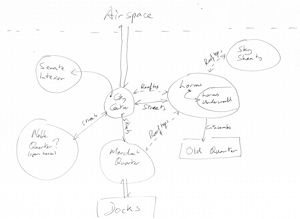 And here’s my stacks: 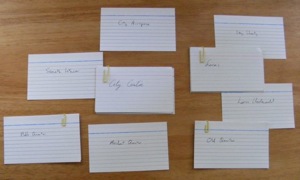 OK, it’s not exactly pretty, but I’m getting a feel for this place. Lorms is a big sprawling mess on the east side of the city, embarassingly close to the centre, a hive of scum and villainy built on the haunted ruins of the Old Quarter. On the other side are the nice shiny houses of the Noble quarter. Jolly good.

p>Cities will grow according to the needs of the players as their PCs explore. The reasons for that exploration are usually plot driven (and by this I assume there are catalysts that the players have noticed and are following, rather than just railroading) but could be curiosity, conquest and so on.

The examples above are of pre-session prep, focusing on the geography of the city; as a result, they make use of the Portal attribute for growth and development. But that isn’t necessarily the only approach.

You could grow your city according to plot drive. For example, the PCs find a clue (catalyst) on the rooftops near the Senate building points to the Opera House. The development of the Opera House’s District is a consequence of the needs of the plot. You don’t need much more to run a scene in the Opera House itself, but it will probably help to at least name the District it sits in, and add a Streets location as an Entry/Exit point. But that’s all you need to do.

Similarly the players may focus on Domains (where are the powerful people) or even Tensions (where is the action) for exploration. They aren’t concerned with geography so much. But to help you to visualise your city and to make it real to the players it will help to name the District and to provide at least one Entry/Exit point.

If there is one certainty it’s that no matter how much prep you do, your players will find a way to ignore your carefully prepared world and explore the uncharted territory. That’s why obsessing over minutae of a District when you don’t really care or plan to run a game in that District is a waste of time. Until the players care, it’s not worth bothering about too much. And since you’re going to be on the defensive at some point regarding your city design, it’s good to get some practice. Next time I’ll talk about reacting to player creativity and exploration.