A few years ago I went on a leadership course. It was a strange and challenging experience that certainly altered my view on life and people forever.

It consisted of a number of lectures and team-building exercises (with a bunch of strangers). It was not the sort of course where you get a handy ring binder at the end; no-one took notes when the lectures were delivered. Even so I can remember the content of most of them, which is pretty remarkable retention.

The number one concept that remains is the idea of tiers of communication. I don’t think I’ve seen this anywhere else (so if a reader can identify the theory, I’d be grateful). 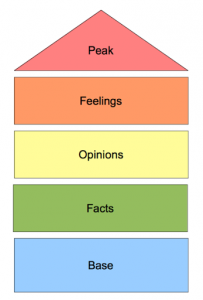 Base is the bare minimum of communication you must do to get by. Facts are irrefutable observations. Once you go into the realm of Opinions you start to risk offending someone by talking to them. Showing them Feelings exposes you to even greater risk–but at the same time there is a better overall understanding. It all comes together in Peak communication, the optimum and complete form.

I like models, and this is one of the most useful I’ve encountered. It’s easy to observe and test. Colleagues who only communicate with smalltalk can become wrong-footed when you suddenly move to expressing opinions. The main example we got was greeting someone with “how are you?” and being answered with a cheery “fine!” despite the fact they were limping. Once you move to “actually, I’m in a lot of pain” you’ve automatically moved into an uncomfortable space of statement of fact (or even feelings). You’ve put a foot on the communication ladder.

I’ve been suffering with the misery of sciatica for two weeks now. This is why it’s 4am and I’m standing up to write a blog post waiting for the painkillers to start working, when I should be asleep.

So when colleagues ask me “how are you?” I reply honestly. It’s clear they didn’t want to know; they’d rather get away. I tend to let them off pretty quickly by changing the subject.

One chap asked me how I was and I did just that. He nodded politely and made to disappear. Then as we were parting, he said

I know he’s a Christian, but even so–he’s taken more risk than I did in that conversation by leaping into the realm of Opinion (and if he was sincere, Feeling) about his personal religion.

I don’t have much more to say about that. I guess I could talk about how in gaming we should strive towards peak communication between characters by taking risks, stating Opinions and displaying Feelings of our characters. But, the main thing I’m thinking about now is how deeply those statements intrude into the thoughts of others, particularly a secular heathen like myself.

I also think about how much less they would matter if spoken in a Christian community, where prayer is taken for granted. In that context, they’re a statement of Fact. But they’re still an expression of Feeling, maybe even Peak communication. As people become more alike, do you go up the scale or down?