I snagged these titles in the DriveThruRPG January sale. 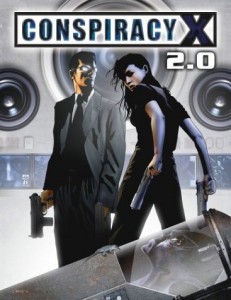 There’s not much to be said about Conspiracy X, other than it’s standard Unisystem (classic) stuff. It repeats the system from AFMBE and Terra Primate, including chunks of psionics, qualities and drawbacks, etc.

It does a couple of interesting things, though. It provides templates for (US-centric) government and military forces. OK, you could construct these “skill packages”, but it’s nice to have something pre-made. Also it’s interesting for the sheer breadth of occupations listed; it does give a sense of a global network where no-one really knows what’s going on.

The best parts are the “pulling strings” qualities and the “cell creation”. The former are qualities where you can exert influence to get things done–summon accomplices, call in air strikes, use external laboratories, and so on.

Cell creation deals with creating your own little base of operations. Locations, facilities, staff and other resources are all point-buy. I could see this being a real fun activity for the party (and a nice source of inter-departmental tension even before the missions start). The nice part here is they’ve incorporated all the weapons, vehicles and other equipment lists. Everything costs departmental resources. It’s pretty old-school to demand players to itemise their kit like this, but should add to the immersion.

Add that together and you should get an autonomous cell of characters with a range of departmental strings they can pull and a place to call their own. And of course the presence of their cell implies goodness-knows how many other cells worldwide, connected to however-many agencies. Conspiracy? You bet.

Well, mostly. There’s not much in the way of antagonists. There’s a potted history at the back which I haven’t read yet. Since I’m more inclined to use this game as a toolkit, I’m not so bothered. Still it does the usual Unisystem job of padding the book with yet another version of the rules. This book could have easily been an AFMBE sourcebook, but since it’s a brand in its own right, it gets its own line.

It’s not the best value (full price) if you already have other Unisystem corebooks, but the Cell creation is a unique feature that adds a lot of value; I can already see potential with supers (a la Planetary), supernaturals, and even Transhuman/Cyberpunk Space (making use of All Tomorrow’s Zombies). Of the four corebooks I own, this is probably the one I like the most just because it does modern organisations so well. However if all you want is an antagonist faction with defined resources, there is a simpler alternative in the Angel RPG–that one does corporations, sects and government cells adequately. 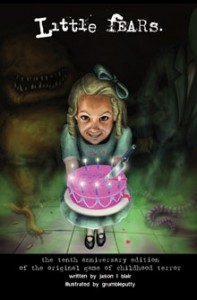 Looking at the first few pages I can feel the controversy dripping off this one, that lead to at least some people saying/thinking “oh, that’s the game with the child abuse”. That closes a portion of your audience off, on principle.

Let’s be clear. The author mentions abuse, and says it happens to innocents, and suggests how it might affect characters. He also says its inclusion in the game doesn’t mean you should use it in your game. He treats the subject as sensitively (and briefly) as possible.

That controversial style of play is True Horror (“removing some fantastical elements and adding more humanity to the story”). The author states (in his white-on-black annotations–this is a 10th anniversary edition) that while that was the play style that attracted the most attention, hardly anyone he knew played in that way; they would stick to the nightmarish fantasy of monsters in closets, etc.

In some ways Little Fears is the pre-teen equivalent of Buffy with more focus on innocence and magic through belief, and with a defined enemy pantheon (the seven Kings of Closetland). There are some good guys, the “Divine Host”. Between the original and this edition the Divine Host have lost some definition. In the original the presence of a defined “good pantheon” was suggestive of a supernatural war, something that glossed over the very real, personal horrors felt by the PCs. The author deliberately made the guardian angels of the Divine Host nebulous to return focus to the children and their own ability to overcome evil.

There are a couple of nice mechanical touches. For example, the character generation includes a questionnaire with questions like “what’s your (nick)name?” and “who is your best friend?”. These are not just window dressing; they have a mechanical function since later on we’re told exactly how the monsters of Closetland use the answers to get you.

Other mechanics are pretty much what you’d expect if you’ve played Adult horror games with insanity mechanics–you gain Fear, you lose Innocence (and lose too much Innoncense and you become Blind to Closetland, like an adult). Dice rolling is all about rolling a number of d6 and picking the highest value you roll on any one die–the modifiers are Qualities which add dice (though Negative Qualities that apply force you to take the worst result, not the best). It’s simple enough, though it requires claiming attributes which is not a mechanic I am wild about.

One interesting feature is how kids oppose monsters: when kids fight monsters they roll against a static number rather than an opposed roll against the monster. In other words if the monster gets the kid, it’s due to a failing of the child, not because the monster is monstrous. It makes a nasty sort of sense, although causes me to raise an eyebrow when combined with the True Horror style of play.

As for Closetland–each King is described, although mostly stylistically rather than mechanically. I would have preferred to read a bit more practical advice on using them as opponents, and less about how to roleplay them. There is advice on how one crosses over into Closetland, and back again. Closetland is (as you would expect) like the Umbra and Penumbra in the WoD–a fantasy world that overlaps (or invades) ours in places.

Making the inevitable comparison with Monsters and Other Childish Things, Little Fears is not a game to be played for laughs (or even black comedy). Actually much of the tone that Dreadful Secrets of Candlewick Manor tries to exude (poor orphans, weird uncaring and dangerous world) is much more effectively brought to life. It does beg the question whether you can have too much of a “good” thing.