Setting aside the four-book story, the multiple pathways (many ending in complete failure, endings all the more poignant for having succeeded in the earlier books), and the wonderful spell system, the impact of that series came from John Blanche. 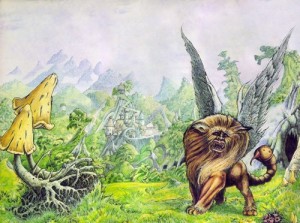 This image is taken from a forum post in 2010 from a user called “Gambit37”, who has taken the image from the front and back of The Shamutanti Hills and photoshopped it a bit (update: cleaned up by another user “cowsmanaut” – lovely). I think you’ll agree they’ve done a great job, and it showcases Blanche beautifully. The town in the middle looks as though it’s influenced by Roger Dean, who was responsible for my Prog Rock habit later in life. Less said about that the better, I think.

This fellow makes a nice, succinct post on Blanche, and comments on his right-to-left style and the way it draws the reader’s eye. Though of course the above is a book cover–the book wouldn’t have looked nearly as cool with a couple of giant mushrooms on the front (unless you’re mycophobic).

I recently discovered the gothic punk tumblr for Blanche’s work (it’s been around for some time according to the Tears of Envy blog), so take a look if you like that sort of thing. A picture is worth a thousand words, after all.

Another illustrator from my childhood is Gary Chalk, who drew similarly distinctive images in the Lone Wolf and other Magnamund books. Project Aon appears to be re-publishing old Lone Wolf material, though I don’t know if it will include Chalk’s illustrations, but I hope so:

Now our gamebooks have entered the electronic age. It was inevitable. It is a good thing: a precious gateway to gaming that can be enjoyed by young and old is preserved. On the other hand I don’t get what Eddie Sharam’s gif illustrations add to Blanche’s original work. I see that the Forest of Doom has also been given a makeover too, with Martin McKenna’s cover a duplicate of Iain McCaig’s original shapeshifter. I don’t see the point unless it was to overcome a legal obstacle.

With the recent Old School Renaissance and the focus of LotFP on “weird”, artwork has become edgy once more. It’s a refreshing departure from the glossy comic-book style rut of the D&D era. Artists like Jason Rainville and Cynthia Sheppard manage distinctive styles that evoke a particular flavour of fantasy.

But Blanche and Chalk and McCaig and Archilleos and Miller did this already. Blanche’s art is weird, full stop. Blanche and Miller contribute massively to the feel of Warhammer Fantasy Role Play, more than the game’s career system or its over-use of umlauts. The OSR movement for discovering the “old ways” of playing is laudible, but its true value is in opening paths back to  distinctive art and feel–the art that drew some of us to the hobby in the first place–and away from the sanitised, fantasy-by-numbers tripe that plagues the likes of Exalted, D&D and the rest of the post-Tolkien rubbish.