Remember Me How I Was 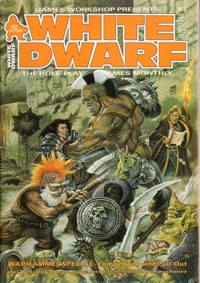 This is the cover of WD82. It contains a Traveller adventure, a great article on running an AD&D Discworld game, a Judge Dredd article, a Warhammer article, an article about cartography, and all the usual columns–Open Box reviews Jorune of all things, Dave Langford’s Critical Mass considers Donaldson’s The Mirror Of Her Dreams, and there’s Gobbledigook, Thrud, ‘Eavy Metal, all the other good bits. There’s also a very nice pull-out for the original 1e WFRP. 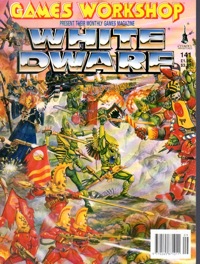 This is the cover of WD141, the last one I have. It reads like a sales catalogue. There’s a piece on epic scale WH40k, a piece on wood elf armies, a piece on the forthcoming Golden Demon awards, a “battle report” of someone else’s war-game (ooh, exciting) that lasts 14 pages, a big section on GW’s Space Fleet line, and seven pages of unpainted minatures with serial numbers in the back. There are some nice glossy photos of painted minis, and a couple of full page illustrations and… lots of adverts for GW.

I don’t begrudge GW making money out of a glorified product brochure, or choosing to refocus their business firstly in-house and later by dropping RPGs entirely.

Oh no, wait a minute, I do. I begrudge the hell out of GW for turning a punky, irreverent, quintessentially British RPG magazine into a shill for their cynical, youth-focused product line. And that goes double for their RPG product lines. This may be unreasonable of me, but what the hell: towards the end of the era of GW as a RPG brand, they produced British imprints of BRP titles as well as WFRP which was a decent British competitor to the US staples of D&D and Runequest. Black Industries‘ resurrection of WFRP was a noble effort (and short lived) but by then the punk spirit was gone. The latest incarnation (and its siblings) are pretty things but they don’t have the heart of the WFRP1e/WH40k Rogue Trader mashups we cobbled together in the 80s.

British gaming is like British Hi Fi. It does its thing and it doesn’t compromise; it has texture and flavour; it’s great value for money. GW is no longer any of these things. We need an OSR for the British Old School. I guess Zweihander may have to do, for now.

Now that GW has taken the step of trademark bullying over “Space Marine”, my last mote of sympathy for the brand is exhausted. I hate to sound like an old git, but that logo used to mean something to folks around here, once upon a time.

Interestingly there’s a letter from a certain Davis Morris of Wandsworth in issue 85, which concludes:

No. It’s you people at WD that I’m griping about. You are the cause of the rot. You shove in a whole mess of junk to help you sell more copies and more game, never mind if it’s giving all those newcomers a useful start.

What we’re seeing in WD now is a sellout–like a photography mag shoving ‘glamour’ pics into its pages to boost circulation. Any blaming or sneering I have to do is directed at the commercialism that motivates this, not at the readers and gamers who are forced to suffer the consequences.