A friend complained that Ron Edwards’ Sorcerer is so badly written that he had to produce an annotated version just to make it playable. I’m not sure if they were joking.

I backed the kickstarter after trying and failing to get a hard copy. As a good faith gesture the backers got draft versions without cover art–which, when it arrives from Thomas Denmark will look something like this: 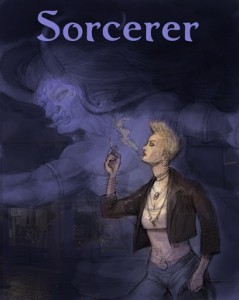 I assume Denmark will do some polishing for the final image, but I like the rough quality–Sorcerer is proud of its indie roots and this cover makes it feel like a homegrown game. It’s not sanitized, it’s full of flavour. Man, I can’t wait to see the finished version.

I wanted to get to the bottom of the aforementioned complaint, so this will be a 2-pass process. First I’ll try to just read the original text (copyright 2001) and then I’ll re-read with the annotations (copyright 2012).

Sorcerer is the first of Edwards’ games, and arguably the most conventional. Its reason for existence is White Wolf and their failure to deliver a story-telling game. I don’t quite share Edwards’ moral outrage although I do feel the WW lines collapsed under their own weight around the time of Sorcerer’s first draft (1996). Mage, the game I have most affinity with1 is a mess of weak magic rules that we mostly ignored in favour of freeform play. Also, I have no patience for metaplot.

I realised a while ago that I should have been running Over The Edge, not Mage in those years. It would have served exactly the same purpose–a few skeleton abilities and maybe fringe powers, and voila–instant Magick User. Given OTE’s influence on Sorcerer, this is going to be an interesting comparison.

The book’s seven chapters are Introduction, Creating Sorcerers, Demons, Playing Sorcerer, Rules for Sorcery, Rules for Everything Else, and Theme and Meaning.

There is no setting to speak of. This game is a framework for playing characters who have some kind of power that most people don’t have. The only reference to the setting Edwards makes is in the video above–to point out that demons and magic aren’t part of the setting where the PCs are, and yet the PCs have all managed to summon demons.

More than anything this recalls Clive Barker’s Great and Secret Show, with the character Jaffe divining the Art from cryptic code found in a dead letter office in Omaha. The concept of awakening in this way–through self-motivated discovery of a magical world–is how Mage: The Ascension should be, but in Mage the process of awakening is an automatic2 membership into a particular magic-hat-wearing club (whether you want it or not). Sorcerers are private; they have chosen to work magic and summon demons; they don’t answer to anyone and they certainly don’t get to whine about how a talent they didn’t want was thrust upon them.

A lot of this is my inference, because the starting text is “sorcerers–demons–how to roll dice–go!” Edwards explicitly says that sorcerers aren’t spell slingers, and they are arrogant. That’s pretty much all you need to know.

The dice system isn’t much to speak of–it’s a dice pool where the highest single roll wins. I am completely fine with that. I’m also fine with tossing coins. Later in the book Edwards mentions the currency of the game with one die equalling one success equalling one point of damage and so on; I like this concept a lot, and I don’t understand why it isn’t in the introduction.

The second chapter doesn’t waste time: the steps to creating a sorcerer are itemised into nine steps including picking your stats, your demon, your Cover and Price. The system is text light and buzzword heavy, though I never found it ambiguous.

The character generation does a few interesting things. For a start it counts the “body” stat as Stamina and the “mind” stat as Will. There’s an explanation why Edwards doesn’t use the (horribly loaded) staple terms like INT and DEX. I found the approach very refreshing.

There are no skills, with the exception of Lore (the magical stat that all sorcerers have). The Cover is your “day job” and encompasses a range of implied skills as well as attitudes, knowledge and resources. I found this approach very satisfying.

Price and Humanity round out the sorcerer. Price is a penalty for doing magic, and Humanity changes as a consequence of actions. These are all Effectiveness measures (in GNS parlance), though Humanity doubles up as Resource. I think I’m correct in saying none of them are Metagame measures, that is modifiers on behaviour or outcomes based on relationships (if handled differently both Price and Humanity could be metagame, but they’re not).

The most remarkable part of the whole thing is “The Diagram”. Since I’m a sucker for visual organisation aids, I just ate this concept up. Unfortunately it’s presented very badly in the book, to the extent that it’s almost impossible to use without (I guess) seeking clarification from the sorcerer-playing community online. 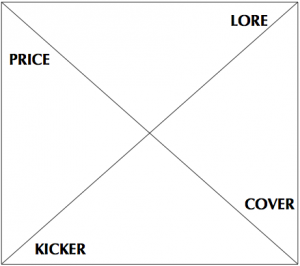 Characters also have Kickers, and later on the GM introduces Bangs. I’m still not exactly sure whether Bangs are the province of the GM alone, or if players can introduce Bangs as well. Kickers are disruptive events that start the player off on their adventure, and they’re very well expressed in the character section. Really, they’re a great idea for any roleplaying game.

Bangs are a great idea too. But honestly, I don’t think they were invented in Sorcerer other than in name. A bang is a provocative event, pre-planned and then dropped into the game for PCs to react to. Great, that’s pretty much how I and everyone I know runs their games today.

The funny thing about Bangs is, for a game that considers emergent story it certainly sounds like scene planning to me. Edwards is right to say the Act/Scene structure in WoD can give rise to “monstrous railroading“, but for the most part we run Scenes in an emergent fashion, with plenty of Bangs to get the PCs moving. Even stranger is the insistence of the text to “get to the bangs!” with advice on how to move a dense party onto a pre-planned bang event. Sounds a bit like railroading to me.

I fell in love with the Stormbringer way of doing magic with demons as capricious reservoirs of power–it means spell casters really are meddling with forces that could destroy them. Sorcerer’s magic has exactly the same appeal, though stripped of Stormbringer’s complexity. Demons get their own character sheet (which the GM holds: the players get to look at their first demon sheet before it’s whisked away). They’re otherwise defined by Needs, Desires, their various Abilities and so forth.

Although “demon” is a loaded term, the text (in the Roleplaying Demons section) calls it an “open concept” and cites many different kinds of things that work as demons–from the souls of the damned dredged up from hell, to advanced technology that’s intrinsically tied to the PC.

Naturally demons must be bound. Some demons must be hosted. Here’s where it gets interesting. Most games with summoning have a binary condition–either the demon is bound to the caster’s will, or it isn’t. In this game, the demon will be bound, no matter what. The twist is that the winner of the binding role has the advantage in future negotiations. So your sorcerer can have their demon, but if it was bound badly then good luck keeping it under control.

The system for defining demons is (as you would expect) the most granular part of the book. There are abilities and different kinds of demon, from parasites and posessors to objects and passing demons. Most interestingly the different types of demons determine who has the power to switch the demon’s Abilities on and off–sometimes the demon chooses, sometimes the sorcerer.

The assumption in this game, as stated previously, is that demons and magic aren’t a part of the world–nevertheless they’re a part of the PC’s world. The PCs therefore have something in common, belonging to a subculture of sorcerers who number dozens worldwide. The Lore stat determines pecking order as well as overall effectiveness, but every sorcerer can perform the basic tasks such as contacting, summoning and binding demons. We know they’re all part of the same magician’s club, so there’s really no need for more detail than where it’s already been placed–the types, the abilities, the needs, and the overall currency.

I’ve skipped the section on system, because the system is so light I hardly think it’s worth noting. The Themes section rounds out the book (aside from the System Does Matter essay in the appendix).

Themes and Meaning really speaks to me. It’s strongly integrated with the concept of demons and of sorcerers being self-reliant, arrogant characters, very small in number and both privileged and cursed. A lot of the sense of exclusivity I got from Vampire 1st edition (before the cartoon violence) is here. The GM is encouraged to think about why sorcery exists and what it represents. I can think of a few ways to translate Vampire into Sorcerer (e.g. with parasite demons). Overall Sorcerer is a credible alternative to the World of Darkness, stripped of metaplot and gothy pretensions and with actually nasty supernaturals instead of fluffy balls of angst.

p>This post is already too long to dive into the annotations. My first look at Sorcerer has revealed a game at least I find pretty compelling–but not without numerous flaws.

Is it as incoherent as my friend’s comment suggests? Well, I’ve read commercially produced games that are longer and more rambling (Wild Talents, I’m looking at you). Sorcerer is unencumbered by difficult system or setting terminology, so it’s obtuse areas are easy to discover and not too hard to guess at or work around.

The game does bring a new set of labels and in some cases fails to capitalise on those labels as new concepts. Bangs are a good concept, but not new in the way they’re presented3 (I don’t think they were ever new). The Diagram is both a good concept and new–would it have killed Edwards to provide an example?

In both cases I want more. I think he got that message–I know that Bangs, the Diagram and a host of other features are heavily annotated. It is a shame they weren’t covered first time around, but Sorcerer is still a playable and very compelling game without them.

My only disappointment is it’s probably not suitable for one-shot play, given the approach to character generation. That’s OK, though; one-shot play is usually about overcoming obstacles, not emergent play.