This is sort of a request from an online acquaintance. 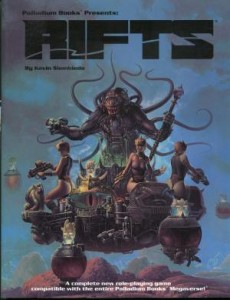 I owned the original Rifts, the first couple of sourcebooks (including the original Vampire Kingdoms) and even the Conversion Book–at the time we had other Palladium games like TMNT and Robotech.

I hadn’t touched Rifts for years. My dim recollection was of a system so unplayable and unfocused that it was impossible to make it through a second session. But I was young then–surely with nearly 30 years experience I could squeeze some value from the game?

Just holding the book in my hand took me back 20 years. Strange to feel yourself holding an artefact of your youth–and this book, for me, was particularly resonant.

I didn’t have long. The pentagram was a bit rough and ready, and the book howled as I nailed it down. The binding took me about four hours; I went through a gallon of coffee and lost two pints of blood.

Once the thing was bound, I gathered up the whole library, took it into the back garden and burned it. The flames were a lambent green, and accompanied by jets of white stars and lightning shrieking into the earth. God knows what the neighbours thought. Once they were completely burned I gathered the ashes up in a dustbin. Then I ran the dustbin over a few times in the car. Then I drove the car to Beachy Head and pitched the dustbin over the cliff. Then I set fire to the ocean just to be sure.

You nearly had me, you bastard. But I’m on to you now. The next time it won’t be so easy.

If you really want a retrospective on Rifts, you could go here. I recommend some sort of eye protection.

I have to admit the Glitter Boy was pretty cool, though.