Previous examples of the City Accelerator were just made up for demonstration purposes. Here I’m going to try to use a real game I am running as a worked example.

The game is called Sunder’s Children.

Sunder is a village at the edge of a Kingdom at war. Every year the Army comes to recruit the brave, the adventurous, and the ambitious to cross the Valley and do battle with the Foe. Glory and riches are promised to the returning heroes; horror and death to everyone else. The Children of Sunder compete for the Recruiter’s attention as a means to escape the drudgery of a farmer’s life.This year you were not picked, and watched your friends and family go off to war. Were you too weak? Too young? A coward?

The game will be about… farming.

I got a stack of index cards, and started writing a heading on each card for the location. I wrote each location down as it came to mind. I didn’t worry about whether the location was out of place. I didn’t try to flesh the location out. I didn’t consider it in geographic space, although some of the cards include compass points in the description. I just tried to keep writing locations until I ran out of ideas. 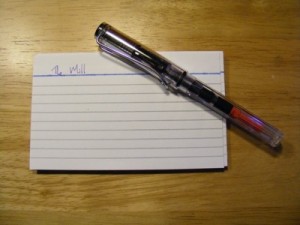 Here’s the thing about brainstorming: at some point, you will run out of ideas. This is a natural part of the process. You can then do one of two things–push through the mental block and continue to write crap until you write something decent, or take a pause for an overview and identify gaps or areas that deserve more detail.

I did a combination of both. First, it took me about 5 minutes to make around 30 cards–locations ranging from the scary woods at the edge of the village, to those key locations at the centre of the village.

Once I’d ran out of steam, I gathered them into Districts. 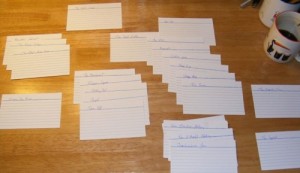 To make more progress I needed to have an overview. The second stage was to gather my cards into Districts. That terminology doesn’t quite work outside of a city, but I’ll keep it for now.

I decided the first District would be the village centre; the second would be the area to the West of the village that included the mysterious territory of the Enemy; then eight more, one for each farmstead. Lastly I grouped Everything Outside The Village as one District–this included everything from the nearby lakes and mountains to the closest large town and the Capital itself. Yes, they’re all in completely different locations–but from a villager’s point of view, they’re all equally distant and therefore can be lumped together. 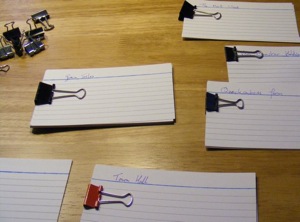 Many of the locations are farming locations–I simply stacked those into different farmsteads. Now, the emphasis of the tool is identify the important bits. If I mention the onion patch of one farm, it doesn’t mean none of the other farms have onion patches–it just means that this particular onion patch is important. This is important in the next step…

My village isn’t done yet. There are an awful lot of farmhouses an no actual farms. I go back to Step One and Start Writing again.

The difference is this time, I know what framework I’m working to. This focuses my attention. I write more Farm locations. Then the village centre looks a bit sparse, so I think of other locations there. Then I think about the surrounding area some more. Gradually I produce more cards and fatten up those District stacks. 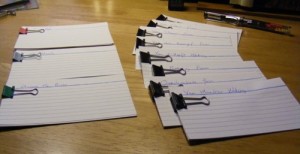 At some point I think I have enough. I might add a card here or there later, but for now it’s starting to feel like a community. I could run a game here. What I need now is…

Optional, but probably useful. I considered Everything Outside The Village beyond the boundary of the paper. This at least gives me an idea of where different farms are. 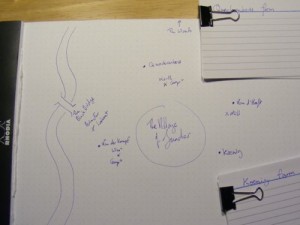 I have several stacks of cards. I now need to decide on their Priorities. My approach was a lot like Step One–I didn’t think too long about the numbers I applied, simply went with my gut feeling on what the numbers should be. 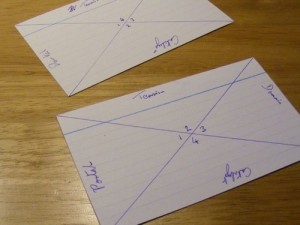 This was the most time consuming part, because it involved drawing a lot of straight lines: 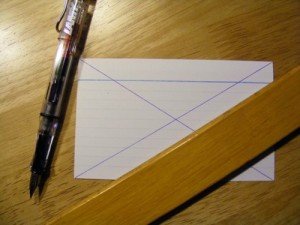 Once I’d rated each card, I summarised them by District. 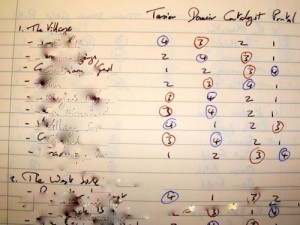 I’ve blurred out the names of the locations in case any future players read this (unlikely, but hey). The table lets me see at a glance which aspects are dominant in which district.

This is the first time I’ve used the tool in anger. What do I have to show for my efforts?

There are still a few unknowns, however. Foremost in my mind: I don’t know if the four criteria I picked are going to remain equally useful. Already in the numbers I can see a bias against the Portal axis. Is this just a consequence of this game, or a general indication that it’s not so useful?

p>Vincent Baker’s Apocalypse World is all about the people. He also says you should make maps like crazy. I totally agree.

In AW the structure is the people; the maps that are drawn are a consequence of the emergent story, but what matters is how the PCs relate to the NPCs.

My approach has been location-centric rather than people centric. There’s no-one living in my village yet (aside from family names). That’s OK. In this case, people are a consequence of locations. This is not denying NPC agency, but it is a reality of a fictional world: people are found in the areas where the action is, and become part of the story. You can start with the people, or you can start with the world. The two are intrinsically linked.

« Playlist: An Echo
Safari So Goodi »