“You’re about due for something new to geek over” said the other half recently. 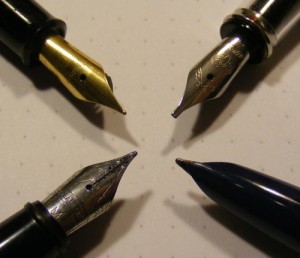 We’ve just started playing De Profundis and although I planned to type all my 1920’s style letters (with the Travelling Typewriter font) handwriting them is a lot more fun.

Some time ago I decided to buy one fountain pen. Then I kept it in a desk for ages and never used it. Then I aquired a second fountain pen from my late grandmother, which prompted me to start using the first. Since then I’ve carried a fountain pen to work every day. 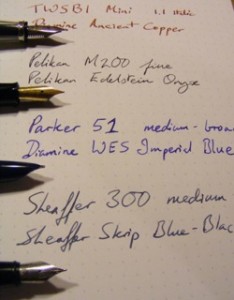 Top to bottom, the four pens are a clear TWSBI mini with a steel italic nib, a Pelikan M200 with a fine gold-plated steel nib, a Parker 51 with a broad-ish nib which is probably gold but I don’t know, and my boring Sheaffer 300  with medium steel nib.

The Sheaffer is my going-to-work pen, including going abroad–it’s the only one that takes cartridges and I’m not about to walk onto a plane with a full ink reservoir. Its body is brass and it has a really strong articulated clip that can even go into my leather jacket.

The Parker is a vintage pen. No idea what age; I inherited it from my late grandmother. It’s my “Sunday Best” pen, for obvious reasons.

I didn’t need a third pen, but the Pelikan was a birthday present. I certainly didn’t need a fourth pen, the TWSBI–that was a recent present to myself, and is pretty impractical with its 1.1 italic nib.

They all write differently. The Pelikan is probably the most fun, being slightly springy and giving my handwriting the most slant. The Parker and the Sheaffer are both lovely and smooth, although different due to weight, thickness, etc.

The TWSBI needs a bit of care because of the italic nib, but it’s very nice and smooth. Nice enough that I fancy a broader italic to practice some blackletter and other styles. 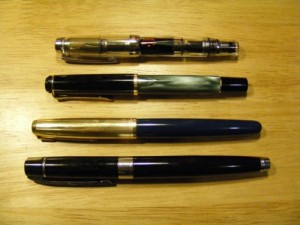 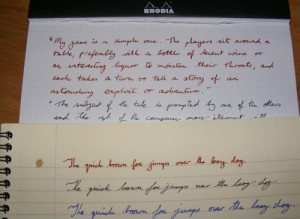 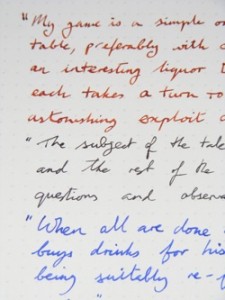 The runner up is Pukka Vellum. It’s a bit yellow which is a feature, although blue looks slightly peculiar on it. It’s only available ruled, and it’s slightly rougher – but it’s spiral bound, punched and perforated making it easy to bind up the useful notes.

Due to De Profundis I’m also experimenting with nice letter paper. Since the stamp is more than 50% of the cost of sending a letter, spending a bit more on nice paper makes sense–writing on laid paper is a lot more interesting and (I hope) makes the letters nicer to receive.

I would fancy some Old Crown Mill paper, however it only seems to come in A4 (too large for a handwritten letter) and A5 (too small). In between there’s the Post Quarto size which is just right, and supplied by Basildon Bond. 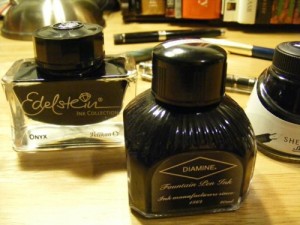 Diamine inks are UK-made, cheaper than than fancy inks and come in a hundred colours. The Edelstein Onyx comes in a nice bottle and flows well on all sorts of paper–but it’s rather boring.

It’s worth noting that pen luminary Richard Binder rates Diamine as highly reliable and low maintenance, which is good to know. Also I love the bottle my WES Blue came in.

« The Tyranny of Dexterity
Playlist: An Echo »