…I went abroad for work and caught something unspeakable from The French; a nasty little bug that did its worst about 12 hours after I landed back home and pretty much wiped out the weekend.

Coughing my way back to the normal routine, I’ve already missed a few deadlines–two weeks of playlists, for one thing–but this will all be rectified shortly. In the meantime I’ve been playing with pen and paper.

The latest fountain pen aquisition is a Lamy Safari. I bought two–a Vista (clear plastic) and the Safari in white. I offered one to my wife, who said “I’ll have the clear one, the white one is U-G-L-Y”. True, although I think of it as Dr Marten’s boot ugly–or maybe Lego brick ugly, since the Safari is made from ABS plastic. 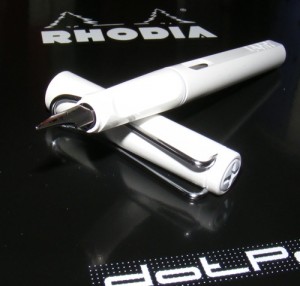 Aren’t you a bit short for a stormtrooper?

The Safari was designed by Wolfgang Fabian and Bernt Spiegel more than 30 years ago as a school pen for German students. Notice the triangular shaped grip that makes you hold the pen in a particular orientation–the kind of “feature” that inspires fanatical devotion or hyperbolic outrage in equal measure. Like anchovies, or the New Mini, or Harry Styles1 you either love it or hate it.

It turns out that a lot of people do love it. And by love it, I mean fetishise it. And don’t tell me it’s nostalgia–not all of these people can be German.

Lamy pander to these obsessives via limited edition colours–last year’s was a rather nice apple green, this year it’s a questionable neon yellow. There’s a variety of combinations of plastic and clip colour, and even country specific editions.

The cunning thing about the Safari is it’s just cheap enough to be an impulse buy, which probably motivates most purchases. But it’s not actually a cheap pen. A new one with a converter will be the best part of 20 quid, which seems a lot for a plastic pen (although shop around and you’ll knock a fiver off that). As for the impulse buying–I found myself considering the green one, the charcoal one, and other colours after buying the two I already had.

The thing about reviews of the pen is that they’re rarely objective. People either love the colours, the swappable nibs, the playroom feel of the pen, or they hate the triangular section and the variable quality control. Here’s my very brief review:

Pros: ABS plastic is tougher than you think; I love the design; the swappable nibs are a huge advantage; cheap enough not to worry if you lose it (unless you paid an outrageous sum for a collectable).

Cons: the nibs vary a lot in quality between batches–going from buttery smooth to really scratchy. The grip section is uncompromising. It’s plastic.

p>I like using fountain pens, and the Safari is one I can travel with and not be upset if I left it in another country. This is not true of my other pens. However, despite the fanatic’s admonitions that they would use a Safari in preference to their other pens costing ten times as much, the Safari isn’t as nice as a Pelikan or a TWSBI or a more expensive pen. But it’s a lot nicer than a biro.

[1] Actually, I quite enjoyed One Direction’s performance at the Brit awards. I say enjoyed, I tolerated it. I say tolerated, I stuck a spoon up my nose. Because if I’m going to hurt that much, I’m going to do it to myself.