The Tyranny of Dexterity

If there’s one trait gamers avoid like the plague, it’s a low DEX. We’re fine with a PC who is stupid, or ugly, or weak, or sickly; but please, don’t make us clumsy.

Why? DEX is shorthand for physical competence, at least in the post-Storyteller milieu. No-one was bothered in the 80s, where skill% or levels were the primary measures of competence, but now the default is to add stat and skill, and DEX makes its way into all kinds of challenges–driving, shooting, fighting, stealth, crafting, dancing, climbing.

Systems of note for pre-eminent Dexterity:

The Palladium System has “Physical Prowess”, a stat which gives massive bonuses to attack, defence and dodging in excess of level gains. I don’t think it influences DEX-type skills as such, but it always dominated in our games.

Vampire 1e was completely broken, at least where Celerity was concerned–that discipline overshadowed everything so badly that the measures applied in 2e to reign it in were positively draconian to the point of making it unplayable.

GURPS bases its entire range of physical skills (with few exceptions) on DEX. The times when it’s more profitable to raise individual skills by 1 point rather than raising DEX are few and far between. GURPS is a special case however, as I’ll discuss later.

Cyberpunk’s REF is the only stat that matters for success in combat–it governs attack, defence, and initiative. Everything else comes down to kit, which comes under a completely different game currency. I understand in 1e Cyberpunk Solos added their Combat Reflexes not only to their Initiative but to every other REF roll as well–making their special ability the equivalent of Celerity.

Paranoia 1e divides DEX betweem Agility and Manual Dexterity–also that game used skill trees as a primary measure of competence (and face it, your clones weren’t going to live that long anyway).

Like D&D, Warhammer FRP 1e also has wargaming roots–combat abilities are stats, rather than derived from generic stats. The Dex attribute is completely separate from Attacks and Weapon Skill, covering non-combat actions.

Apocalypse World is one of the new breed of crunchy games that avoids DEX entirely, and allows for the same moves to be based on different attributes depending on class. There’s not much redundancy in the system, either.

The worst cases of “DEX Supremacy” are where that one stat governs actions, speed, attacking and defending. It’s further compounded in a system like Storyteller where the apparent currency of the game–one die equals one dot equals one action–is not a fair exchange rate across the board.

But, but, but–it’s just a game, after all. If the players all know the key to making a physically competent character is to max out their DEX score, and everyone is free to do so, what’s the problem? None, really, though it invites some terrible kludges to “fix” the problem. Vampire, seat of rule 0 invites house rules that divert attention away from  DEX and towards Strength and Perception as operative traits, although it does this completely unofficially. I remember discussing using Perception for Firearms rolls 15 years ago, but I can’t find a single reference in any text. But it did happen, because it’s the basis used in the VtM: Bloodlines game. Paranoia weren’t the only game to proliferate stats excessively to give more definition to Dexterity–and once you have two attributes for DEX, why not two for CHA1, two for CON, etc.

So players expect dexterity to mean coordination and physical competence–why not just embrace that? It’s what GURPS has done. GURPS uses INT and DEX as shorthand for mental and physical ability and is arguably very successful in doing so. A binary system offers something that more complex systems can’t achieve, which is a clear statement of priority and preference for mental or physical action. The Mind-Body dichotomy is the classic Mage-Fighter scale, with Rogue filling in the middle ground (or providing extra functionality).

I was considering perception and decision-making as attributes of physical challenges. I drew this: 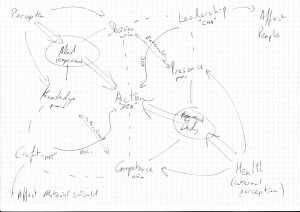 The concept is that perception (top left, bottom right) is the foundation for both mental and physical competence. This perception is the foundation for phyiscal and mental Experience, which in turn generates satellite traits of Presence and Competence (physical) and Knowledge and Decision-making (mental). It’s the interactions of these satellite traits that produce the actual useful processes of game play–of which there are three:

There is a fourth, which is the intersection of Knowledge and physical Presence; the product is some kind of debate, I suppose. While debate is a product of gameplay it’s usually tied to ideologies of characters, which are rarely expressed mechanically (the closest I can think of is Burning Wheel’s BIT system).

Is this model useful? Honestly, I’m not sure. I think it would be a mistake to try to map the satellite attributes in a game, but it should bring to light what really matters in game design–the places where players need to exercise judgement and make decisions in real time.

This is the fallacy of the Storyteller system, with its common currency of physical, mental and social processes. That uniformity is seductive, but ultimately not very useful. The opportunities for character exposition are disproportionately weighted towards some processes over others.

Crucially, the area of “INT” is divorced from direct player decision making and is relegated to a support function2. It’s always great to have smart characters but when planning and thinking falls into the realm of player agency, what good is INT as a gameplay marker? It’s best used as a placeholder for other game aspects like number of spells you can remember, languages, and so on.

So there you have it. There is nothing wrong with calling an attribute “DEX” and having everything default to it. What matters is if there is decision making to be done, every player is clear on how they can make tactical input. More to the point, the player can articulate the kind of game they want (action, social, etc.) and design a character that can actually contribute and not be relegated to a passive support function.