At the last minute I decided to join friends and see Spiro (with support from Telling The Bees).

Folk isn’t my thing, but I enjoyed the support act anyway. The sound was very good–the Old Fire Station is a good space and the sound engineer did a superb job. Clear vocals, instruments present and nicely separated (with the exception of their cellist, who could have done with a bit more volume). Their songs were inspired by Oxford things like May morning and the collection of astrolabes in the Museum of the History of Science.

Then the main act came on. Spiro’s energy was amazing and the performance was precise, coherent and exciting. Mostly they sound like a folked-up Michael Nyman score for a Peter Greenaway film, but there were mathmatical overtones of Steve Reich and Philip Glass. Much more my kind of thing. I bought two of their albums (ripping as I write): 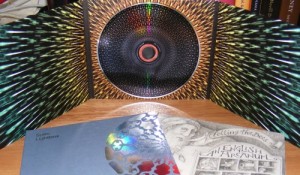 Interior CD case is from their latest album, Kaleidophonica. The other two are their Lightbox album, and Telling the Bees’ An English Arcanum.

Both bands also had a great rapport with the audience. The intimate venue helped, but it was great to see bands so relaxed and at ease, and at the same time funny and erudite. It turned a collection of songs into a memorable performance. Great gig, would see again.