Jack Vance died on May 26th.

I’m a sort of grudging Vance fan. His worlds and characters are fantastic, but everything is viewed at a distance–making it difficult to be emotionally invested in the characters no matter how sympathetic I am to their plight. He makes up for that with plots that don’t outstay their welcome and his arcane vocabulary.

Naturally gamers sort of “owe” Vance for his “influence” on D&D, which was everything to do with Gygax and nothing to do with him AFAIK. Still, everyone knows what Vancian casting is, love it or hate it. Later the Dying Earth rpg emerged, of which (I believe) Vance was said to have been “tolerant”. According to Wikipedia, Talislanta is dedicated to Vance.

The Dying Earth gets all of the attention, but he did write the Lyonesse series which perhaps functions better as a “traditional” fantasy series. For Science Fiction he wrote Emphyrio fairly early on, and much later Night Lamp, and in between the Durdane series and others, all of which seem to be roughly the same plot–a young character with a limited view of the world heads out on adventure to broaden his experience, only to find that he and his fellows are being oppressed by unseen forces. Big Planet seems to follow the opposite route–enlightened characters crashing on a galactic backwater planet and descending into primitive habits–though I confess that book’s been on our shelves for years and I’ve not gotten round to reading yet. Clearly now is the time. 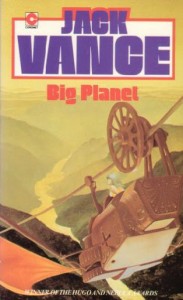 Check out Vance’s own site for covers of his books and even maps of his worlds. Great stuff (though sadly you can’t buy the ebooks from the UK).