I’ve had a thing for the name Konrad since I took a copy of David Ferring’s novel home from the Golden Demon Awards in 1989. I was young then, and didn’t realise what a cynical exercise the Games Workshop novels were. They weren’t bad (they even had Kim Newman writing for them as Jack Yeovil) but they were short and probably bashed out to meet a product launch deadline. I don’t know what I’d make of Konrad today–this review suggests not much.

Anyway, I picked up a completely different Konrad in New York last week. 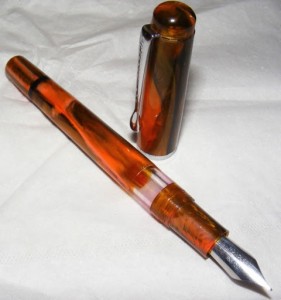 That’s a Noodler’s Konrad in Hawaiian Tortoise. It looks a bit more pink without the flash, and it’s translucent. Really, really pretty. And all for $20. 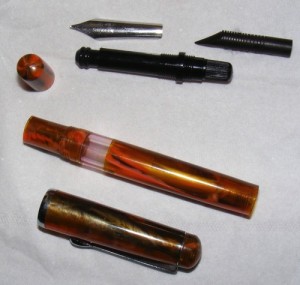 I was a bit wary putting it back together after hearing that if you don’t push the nib back on far enough, you can deform it when you screw the cap on. Forwarned, I didn’t have any problems.

So, assembly isn’t a problem. As for writing, the nib isn’t super smooth but just fine for regular writing. Since it’s a flex nib, I tried some pressure to get line variation: 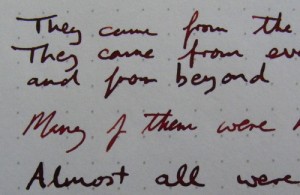 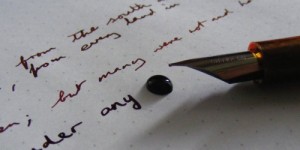 The pen is already very wet and flexing a lot must open up the feed channel enough to cause a blob of ink to collect–and when that blob gets big enough, it drips. The pen practically gushes anyway, using a lot of ink  which then takes minutes to dry. It’s not going to be suitable on anything other than very good paper like Basildon Bond or the Rhodia I’m using.

So, not the most practical writing instrument. When it’s full, I don’t dare store it anywhere other than nib-up in a pen cup. I keep expecting it to explode and shower me with ink. It should be possible to tinker with the feed to adjust the flow (nib and feed are just a friction fit) but even so, it’s probably only going to come out for special occasions.